You are here: Products Hey Neighbour: An Enemies to Lovers Romantic Comedy by Hailey Queen 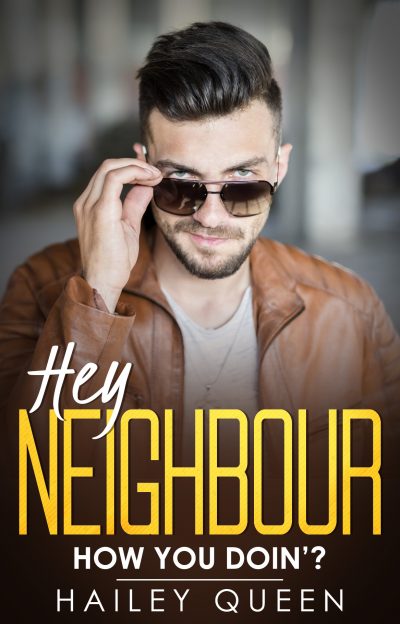 Jessica Goodwin. My next-door neighbour. The woman who unearthed the pleasant memories of my first and only crush.
She is single. Seductive. Occasionally sassy.
And my sworn enemy.
Although things could have been different between us if …
… I hadn’t killed her cat on the very first day, she moved next door.
It was an accident.
Definitely an accident.
But due to my lack of emotions, it appeared otherwise.
Still, bad blood could have been averted. The unfortunate situation could be handled as adults.
But she made the ultimate mistake of calling me an animal and struck a nerve.
Now, I’m in a war against her. Which, according to my niece, Frankie, is a petty rivalry from my side only, and I should stop making a fool of myself.
If only I would be able to do just that.
I’m a typical sociopath who just has to put people down for his own fulfillment.
A ruthless, vengeful, most anti-social, outlaw, son of a bitch who has nothing but time on his hand and skills to make her life a living hell.
But to my surprise, there were some feelings left, or it’s she who has awoken them along with my cock.
Why else would I steal glances of her?
True, she is sexy as hell. Crafted by God himself on a Sunday with a mold that has since been broken.
But that can’t be the reason enough for me to pull down my sunglasses down the bridge of my nose, stare at her un-blinked, and while enjoying the view, whisper to myself ‘Hey Neighbour.’
Or could it?

‘Hey Neighbour’ is an enemies-to-friends-to-lovers romantic comedy featuring a quirky alpha living a recluse life and the girl next door who would make him want to live differently. It’s a full-length standalone romance with no cheating or cliffhanger and ends with a guaranteed HEA.

Unlike what the name suggests, Hailey Queen is not a Royalty, although it would be fun if she were one. She is just a headstrong girl from Minneapolis, Minnesota, now residing in North Carolina.
A die-hard romantic at heart, she writes what she likes to read—laugh out loud, tears running down your face, swoon-worthy, slow-burn sexual tension romance. She loves to write and binge watch on Netflix while having dark chocolate.
When she is not doing these things, she packs her camping bag and off she goes for hiking, or when feeling a little cocky, to Louis Vuitton to set herself straight.

“Nobody has come this close to beat me, Jessica. You should be proud of yourself.”
Sitting in my bra and panties across Odin, it doesn’t make me feel this way. I was proud at the start, though, when after binge-watching poker videos for five hours, I learned enough to win four hands straight, leaving him down to his underwear.
I was surprised at myself, thought of it as a beginner's luck, but the tide changed, and begun Odin’s streak of wins, which led me to believe that it was all a ruse.
A con I was roped in.
A bait I took.
“Full house.” I put my cards down at the table—my best hand for the evening—sure that despite playing against an experienced player, I’ll win and save myself from the humiliation.
Odin glance at his cards and crinkles form on his forehead.
A smile floats on my face; he doesn’t have the cards to beat me. At last, the mighty has fallen.
He sighs. “Well played, Jessica.”
“Yes!” I shout, raising my hands in victory as if the Cubs have won the Super Bowl.
“Straight flush!” he says, spreading his cards on the table.
My hands fall down like a lifeless bird from the sky, and my mouth opens wide with shock.
I lost. No matter which article of clothing I lose, I’ll still be leaving my dignity behind even if I win the next hand.
“Oh, Jessica. You are so gullible. It’s only you and me here. No matter if I get naked or you, it would still be my win.”
“So, would you consider accepting the defeat and strip naked?”
“Yeah, sure.” He scoffs. “Does a hunter let go of his prey if it says pretty please?”—He rubs his hand together—“Go on, then.”
I will have to remove one article of clothing, and I choose my panties.
My thinking is straight. I’ll quickly slide down my panties and close my legs, shutting the view, thereby giving myself a fighting chance to keep my bra on.
As I put my hand on the string of my panties, Odin waves his finger in a no. “Nuh-uh! Bra.”
“What? Why?!”
“Winner's choice. We agreed on it before we began playing.”
“But you haven’t exercised this right the whole night. Why suddenly now?”
He rubs his palm across his chest like a sleazeball. “Because I desperately want to see your boobs bare. I am fascinated by them—especially the mole on your heart.”
“Was ogling them under the constellations not enough for you?”
“Aha! So, you did see me glaring at them that night?”
“It was hard not to when you were acting like a pervert.”
“Now, I don’t have to.” He takes his face in his hands and props his elbows on the table as if he is waiting for the trailer launch of the next Avenger movie.
“Is this really what you want?” Crossing my fingers, I try my luck one more time.
A perverted smile forms on his face. “Oh, absolutely. I may keep your leopard bra as a souvenir too. You look good in leopard, by the way…” He roars like a tiger. “…very fierce. But I am sure you’ll look much better without it.”
“Pervert!” I mumble, reaching my hand behind my back, and close my eyes. I can’t look at him, seeing me like a piece of meat. Uncomfortably, I unhook my bra, remove my arms through the straps, and drop it down to my lap. “Are you happy now? Take a good look at them.” Because you are never going to see them again. “You tricked me into doing this. I’ll never forget this, Odin.”
No lewd remarks. Not a word in admiration. Has his heart stopped? They are a set of boobs—not a Pandora box.
I open my eyes, hoping, he must be in a heavenly state, drooling all over the table, but I find him missing. The chair across me is empty.
He has expressly stated his infatuation with my boobs by his stares, and today, by his words. Must be plotting for long to see them bare. And now, that his desire has come true, he is nowhere to be found.
A white towel descends from above, against the front of my body. I turn my head slightly and see Odin standing behind me, wrapping me up.
But why?
I don’t understand this person.
He gently grazes my face with his fingers as if he is appreciative of me being here. Then, he leans down and kisses me on the top of my head. “Not like this.”

Be the first to review “Hey Neighbour: An Enemies to Lovers Romantic Comedy by Hailey Queen” Cancel reply