You are here: Products Hexes & Oh’s by Koko Brown 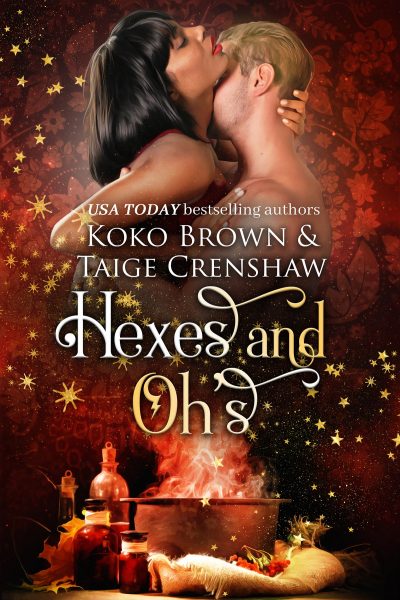 Rosalind Fletcher is a witch but that’s not her only secret. Her one-of-a-kind wedding cakes are infused with a loving spell that produces long-lasting marriages where the men never stray, the women don’t nag, and none of the blissful couples end up in divorce court.

What happens when a bewitched cake falls into the hands of the wrong person? Like her worst enemy Ace Benedict, former NFL player now third generation wedding planner, who accidentally eats a sample meant for his clients? All hormones break loose!

Surrendering to Ace’s lustful appetites proves far easier than finding an antidote, for the conflicted low country witch with a sweet tooth for the blond tight end.

Can Rosalind alter the bewitching powers of a hundred-year old spell before things get out of hand? Will she let her conscience guide her to a remedy or will her heart lock them both in a sham?

USA Today bestselling author Koko Brown writing career began at the tender age of nine when she self-published a newspaper she distributed to her fellow classmates. Unfortunately, the school principal didn't appreciate the competition and put her out of business after one best-selling issue. Koko continued to write and read everything she could get her hands on. She honed her writing skills as a staff writer on her college's newspaper, writing obituaries for the local newspaper, and teaching English to secondary grade students. While not writing, Koko loves to travel, scavenge thrift stores, and ride motorcycles.

USA Today Bestselling Author Taige Crenshaw has been enthralled with the written word from the time she picked up her first book. It wasn’t long before she started to make up her own tales of romance. Her novels are set in the modern day between people who know what they want and how to get it. Taige also sets her stories in the future with vast universes between beautiful, strange and unique beings with lots of spice and sensuality added to her work. Always hard at work creating new and exciting places Taige can be found curled up with a hot novel with exciting characters when she is not creating her own.

This book was inspired by Richard and Mildred Loving, who were not looking to change history. Their desire to be married and raise a family in peace set a precedent which abolished anti-miscegenation laws and spurred the passing of gay marriage rights.

In all the times he’d eaten Rosalind’s cakes, he’d never experienced anything like this. Shuddering, Ace felt his knees fill with champagne. Afraid he might buckle, his free hand grasped table to steady himself. He hadn’t been this lightheaded since Oscar “Dump Truck” Togalu knocked him out the frame during a postseason game. Still, his condition didn’t prevent him from wanting another bite of cake. Ravenous, he raised the slice to take another bite, but a hand slapped it onto the table.

“That cake wasn’t intended for you,” Rosalind cut into him.

Every muscle in Ace’s body tensed. Husky with emotion, her voice now vibrated on a different frequency―one only his cock could hear.

Oblivious, she continued her rant, “So you have no right to be eating it. I knew I shouldn’t have left you alone in here.”

Ace didn’t understand what the big deal was, but he didn’t stop her tirade. He’d focused all his attention on her luscious curves, outlined to perfection beneath a pale yellow sundress. Her agitated movements made her breasts jiggle and her ass shake while she paced. With each pass, his fingers started to itch like all those times he’d watched a football glide through the air and he ached to get a piece of it.

“Don’t you have anything to say?” she demanded, whirling on him. Her brown eyes glittered with unchecked fury.
I want to turn you over my knee, spank that beautiful ass. “Not going to say I’m sorry. I love your cakes.”

For some reason, he felt compelled to eat more. He stepped forward to round up the scattered pieces. She slapped his hand again, sending them flying in the air.

“What’s your problem?” He stalked her while she scooped up the crumbs. “You’re wasting perfectly good cake.”

“Like I said, this cake wasn’t meant for you.”

Her words didn’t dissuade him. He reached for the plate one last time but she strong-armed him better than any wide receiver worth his contract and dumped the entire plate in the trash. She even removed the garbage liner. Not realizing he’d shadowed her, she slammed into him. Right along with all the years he’d spent lusting after her.

Full body contact. That’s all it took to lose control and finally act on his instincts. Sure, he’d dabbled in a little harmless flirting but he’d managed to maintain his distance, keep it professional. This was different. There were too many triggers: a touch of her silky brown skin, the press of her full breasts against his chest, her sweet perfume bombarding his senses. He’d have to be superhuman to maintain his composure.

Adrenaline pumped through him as if it were game day. His focus shrank. Eyes on the prize, he reached out.
“Keep your hands to yourself, Benedict.” She rounded on him.

Fat chance. As one of the league’s all-time receivers, he rarely dropped what he caught. And no chance in hell he’d fumble this before claiming at least one kiss. Determined to improve his stats, Ace adjusted his grip, earning him a startled gasp and a nervous lick of her lips. Bewitched, he followed the wet path of her tongue. Before it retreated