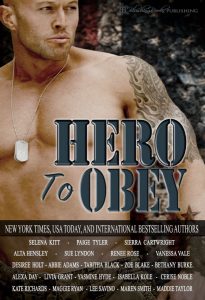 Your hot, dominant military heroes are waiting—and they expect your complete submission.

Vanessa Vale savors the insanity of raising two boys, is figuring out how many meals she can make with a pressure cooker, and teaches a pretty mean karate class when she’s not writing, .She considers herself to be remarkably normal, exceedingly introverted and fairly vanilla, which does not explain her steamy stories and her fascination with cowboys, preferably more than one at a time.

Twenty-two authors wanted to honor our military heroes in time for the Fourth of July. The publisher’s proceeds will be donated to a charity benefiting veterans.

She was looking through his bedside drawer—the one where he kept the kinky shit. Like lube and butt plugs and…yeah. She picked up a hand paddle and spun it around. He ought to be ashamed of himself. Instead, seeing her curiosity sent a fresh surge of lust kicking through him.
“Shouldn’t you be in bed? Getting some rest?”
She jerked and looked up with guilty surprise on her face. “Uh…is this yours?” She spun the paddle around like she admired the feel of it—not like someone who was revolted.
“Yep.” He raised an eyebrow, doing his best to look stern. “Do you need a demonstration?” He toed the door open and folded his arms across his chest.
Her full berry lips parted, tongue darted out to moisten them. Her nipples tented the thin fabric of her shirt. “Yeah.”
Yeah?
He hadn’t expected that answer.
A flush had crept over her cheeks and her eyes looked dilated.
Oh God. He’d been thinking about spanking her ripe little ass since the day he first met her. But no…it was a terrible idea. She had no clue what she’d be getting herself into. He shook his head. “Sorry Dimples. I don’t think you have any idea what you’re saying.”
Her chin kicked up a notch. “Don’t be so sure, Marine.”
Was that a challenge? His cock liked her sass. Too much. He should definitely not be getting spanky with this girl right now. “Nope. You need to get your rest.” He raised his eyebrows and jerked his head toward the bed, doing his best attempt at daddy-dom, which he didn’t even know was in his repertoire.
She held the paddle out to him. Her hand shook. “I need a demonstration.” Her voice cracked.
“Kaitlyn.” He made his voice sympathetic. “The last thing you need is to get mixed up with this sort of thing after what happened to you tonight.”
She swallowed. “I want to forget. I need to feel something different. I mean…I think I might like it. Please?”
He’d like to say it was just out of sympathy that he responded to her pleading, but his cock surged and strained against his pants because the idea of dominating his sweet little neighbor heated his blood.
This was such a bad idea.