You are here: Products Here Comes Trouble by Natalie Acres 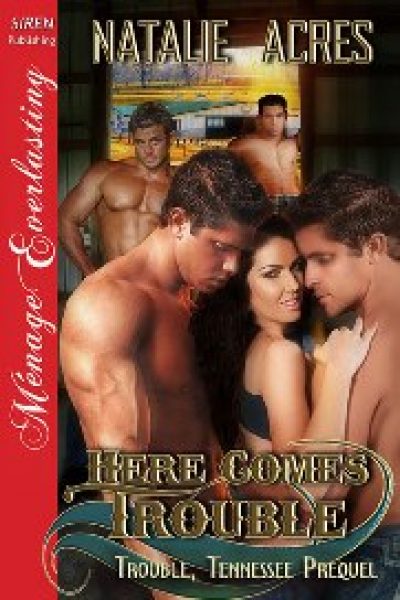 Ellie Hunter wasn’t looking for a protector, but she definitely wanted a place to lay low and hide. Divorced from her abusive husband for over six months, Ellie goes to Trouble’s gates as a last resort after her ex pays her a “final” visit.

Allister McCall, Ryan Thomas, Derek Swinney, and Bradley Powers have known Ellie for the better part of their lives and the memory of sharing her is stamped in their minds. When Ellie arrives in small town Trouble, the men jump to all sorts of illicit assumptions.

Once Ellie reconnects with Allister, Ryan, Derek, and Bradley, Ellie’s life is seemingly complete, assuming her ex-husband will let her live in peace. With Navy SEALs training behind them, Ellie’s men are confident Ellie’s ex will finally let her go but if he refuses there will be hell to pay. One way or another, four men will ensure Ellie is protected, loved, cherished, honored, and adored.

Now she couldn’t even remember why she’d justified what she’d done. Back then, her reasons for marrying Denny seemed quite simple and yet now, the idea of her ex-husband represented life complications. Two years ago, her thought process had placed her in front of one hurdle and then another.
More than anything, she’d been afraid. She’d been running scared for far too long. She’d feared disappointing her father, infuriating her mother, but more than anything else, she had feared if she’d given herself to Allister and then to his friends as well, a part of herself would forever remain out of her reach.
If she’d given her heart to them, they would’ve owned her. Allister in particular would have the power to destroy her.
Allister, Ryan, Derek, and Bradley were the four best men she knew all rolled up into one when they loved her together. The trouble with that was the unusual part of their relationship.
She knew how to love them together. She didn’t know how to love them one on one.
“Allister, we need to talk.”
“We don’t need to talk right now,” he said, cradling her hips and nuzzling her hipbone. His nose seemingly followed the tiny pastel lines in her pajamas before he stalled at the juncture between her thighs.
“Allister, what happened before?” Her lips twitched. Her pulse raced. She was five seconds from spewing a lie, but she still said, “What happened between us, between me and you, Ryan, Derek, and Bradley? It can’t happen again. It won’t happen again.”
Instead of firing back a rebuttal, Allister stood and tilted her chin to his. He gave her a feather-light kiss before he rasped, “Oh you’re right about that, Ellie. The past won’t repeat itself. Not this time. Not ever.”
He marched to the bathroom and slammed the door. A few minutes later she heard him brushing his teeth, apparently helping himself to one of the disposable toothbrushes in the medicine cabinet.
When Allister reentered her room, she nervously awaited him to join her by the bed. She wasn’t sure if she’d moved a muscle since he’d left. He was so different than what she remembered, a harder man maybe, a more determined man for sure.
His arms were powerful, muscular, and ripped. He seemed taller, larger, and much more confident in his speech and his actions. He still possessed those playboy features with chiseled cheeks, thin lips, a slender nose, and boxed jaw, but his demeanor made the difference between the boy she remembered and the man he’d become.
Like most women, Ellie noticed a guy’s backside, and Allister’s firm ass had always looked good in any pair of jeans, but more than his physical features, he had been charming, friendly, and trustworthy. He had been her friend, someone she could count on.
She often wondered if their sexual connection had screwed up their chance for a solid relationship. Had they taken their friendship to the next level too soon, before either of them had contemplated what kind of repercussions they might face?
“Allister, I’m serious.”
“You think I’m not?” He gripped her hips with a firmer hold. He gazed longingly into her eyes and said, “Ask Bradley what he thinks. While you’re at it, talk to Ryan and Derek, too. You’re where you belong, Ellie. You belong in Trouble. You belong with us.
“As far as we’re concerned? You took the long way home but you’re here now and that’s what matters.”
“But I don’t know if I’ll stay.”
“You’ll stay. You’ll stay because you’ll never have a good enough reason to walk away.” He kissed the tip of her nose. “Get some rest.”
She felt abandoned as soon as he walked away. Her heart hammered against her chest and her palms went clammy. With each step he made, she felt the distance he put between them.
He made it to the other side of the room when she said, “That’s why Denny always won.”
“What’s that?” Allister came to an abrupt stop and she sensed his heated gaze working its way over her back and hips, settling on her ass. “What are you talking about, Ellie?” The tight edge in his voice proved she had said enough to demolish his well-guarded control.
She kept her back to him. “You always wanted to be kind, gentle, and loving. You were my trusted confidant, my best friend. I think back to when we were kids and I can’t think of anyone who was a better friend to me than you.” She finally turned and walked toward him, but left the remaining steps between them for a purpose. If he wanted her, he’d meet her halfway. “I said, ‘That’s why Denny always won’ and I didn’t stutter.” She lifted her chin and looked him square in the eye. “If you want me, come and get me, Allister. If you want to win my heart, take my body. You can’t have one without the other. And you can’t be easy and gentle with somebody who only wants to be wild and free.
“You take me, Allister, but don’t treat me like a fine china doll. Don’t kiss me like you’ll bruise me or love me like I’ll break. I’m a woman with needs, Allister, and right now I need you.”