You are here: Products Her Taboo Desire by Sarah J. McLaren 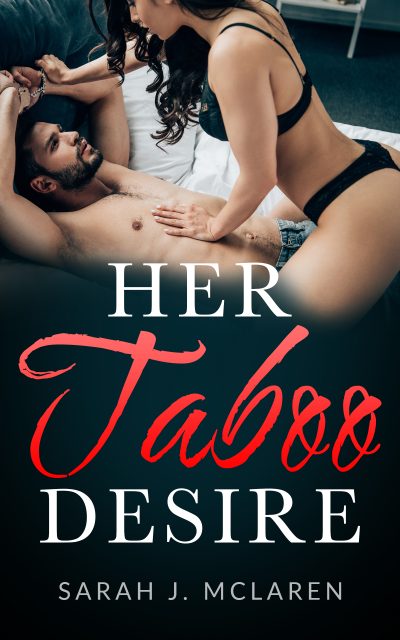 Captain Adelina Torres oversees the D-4 district in Boston. She has everything going for her: a great job with power and authority, a great rapport with her employees, and an amazing sexual relationship with one of her subordinates, Myers. She particularly enjoys her relationship with Myers because she is the dominant one, his boss, the one with all the power. She enjoys having the upper hand, both in her professional life and in the bed.
Due to inevitable circumstances, she is forced to return to her hometown where she reunites with Zack, her childhood sweetheart, the first man she ever fell in love with and the man she lost her virginity to. Will she choose Myers and risk losing her career? Or will she end things with Myers and get back together with Zack?

Hungry for hot and taboo short stories? You have come to the right place. Sarah J. McLaren is International Today Bestselling Author who likes adding some romance to her sexy short stories as well.

Subscribe to her newsletter to get notified about new releases and more
http://eepurl.com/gMb049

Find her on Facebook and participate in contests
https://www.facebook.com/SarahJMcLaren1/?modal=admin_todo_tour

My husband told me that I should put my kinky fantasies on paper.

"What do I say if anyone asks about the marks?" Myers pulled his shirt over his rippling muscles that were now covered in bruises. His skin still glistened with the sweat of their act. Adelina admired his physique and his commitment to his health and body image. A strong body and a kind heart; the perfect man that girls would fantasize about when they were younger.
Adelina stared and imagined herself biting into those biceps. The resistance of the skin and the tingling throughout her body were almost real. Adelina bit her lip to stop her from chopping down on the bulging muscles. Bruises were one thing, but it would be more difficult to explain the bite marks.
She had to look away. “Just tell them that your girlfriend likes it rough” she joked. The flirtation wasn’t enough to calm her. It was the opposite. She couldn’t calm down, an inner battle raged within her.
“The next question would be to ask who she is.”
Adelina snapped from her fantasy. “You can’t tell them. If anyone were to find out…” If anyone found out about them, it surely would be the end of her career. Their relationship would be impossible to explain to their coworkers and she couldn’t tell her bosses that it began prior to Myers’ assignment to the team.
The Commissioner didn’t understand anything. He was strict with the rules even when the rules weren’t strict themselves. This was a special privilege and Adelina would be seen to be taking advantage of her position and the power she holds. The relationship would be viewed as unethical and unfair.
Myers’ arms slid around her. She felt safe, wrapped in his strength. “No one knows. No one will ever know.” His lips brushed her ear. “Trust me.” The hoarse whisper resonated through her.
The alarm broke the silence. She wanted to ignore it, but her sense of responsibility called her. “We have to go.”
"Let's stay here," Myers whispered, making Adelina's knees weak.
She would love nothing more than to miss work and have Myers all to herself. She envisioned the fun that they would have, tying the ropes around his chiseled muscles and pinning his arms to his side. Adelina’s heart raced with anticipation, but she couldn’t throw away her career.
Adelina had spent years working and had finally reached the top position, and this was not a good example to set for Myers. She was responsible for his decisions now as well and to allow him to skip work and have sex all day was not acceptable. His suggestion warranted punishment.
A jingle rang through the hotel room. “Your phone’s ringing,” Myers chuckled. “It’s probably Clayson. Oh, it is.” He held her phone up to her. “Do you have another boyfriend?”
“Lots of them.” Adelina tilted her head to the side and answered the call.
“Captain, you’d better get in here.”

“Fine, let’s cut to the chase. As you know, the council meeting is tomorrow, and I’d like you to represent us there.”
She told him while they were in Adelina’s bed, her fingers stroking his hair. He sat up to face her.
“What?” he snorted.
He saw the dangerous way her eyes narrowed and was instantly reminded of just how powerful Adelina was, not to mention her rank among their people. She waited until his expression was attentive and somber before she continued.
“The commissioner called, and there have been some discrepancies. He said he needs our unit downtown. I am visiting my sister over the weekend and so, I want you to attend the council meeting and report back to me with the details.”
He wanted to say no.
His tongue was practically burning with the urge to say no, but he knew that he could not defy a command from his Captain.
He nodded in agreement.
He was both flattered and worried that somewhere between their unscheduled visits, he had been promoted to the role of her confidant and she now seemed to trust him with serious official business.
But when she flashed him a smile before she departed, all the worries melted away.
Such a beautiful smile on a beautiful woman, he thought.
Was she always destined to want him, she wondered? Had it been destined that she would know just how his presence affected her? Which was probably why he had been visiting at least once a week ever since she had moved to the caves.
Was he seeing other people behind her back? She thought sourly, disliking the image of him in bed with his pick from the array of woman who she felt often fought for the pleasure of bedding him.
As handsome as Myers was, and as charming as he could be when the mood struck him, she knew there were darker things hiding in his nature that made the monster in her look like a little lamb by comparison.
Whatever else Myers was, she felt sure that there was nothing human left about him. He was just an imitation of the man he once was and could never be again.

Be the first to review “Her Taboo Desire by Sarah J. McLaren” Cancel reply