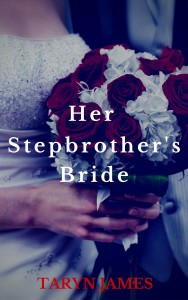 Stepsiblings Melanie Jacobs and billionaire Christian Evans have agreed to raise their baby together. Melanie struggles to convince herself that she wants nothing more than a simple life and platonic, co-parenting arrangement with her stepbrother. But Christian is madly in love with his beautiful stepsister, and is determined to win her heart. Will Melanie resist Christian’s love, or will she find herself becoming … Her Stepbrother’s Bride?

Taryn James enjoys a proper cup of tea and a proper romantic (an sometimes naughty!) story, not always in that order. She lives in a charming, dusty little town in the American West with her significant other and their many pets.

Melanie Jacobs and her stepbrother Christian Evans sat in adjoining chairs in the well-appointed conference room of Christian’s new attorney. They were discussing the proposed custody arrangements for their soon to be born child.
Melanie shifted uncomfortably in her seat. As was so often the case in these last weeks of her pregnancy, the baby was performing a tap-dance routine right on top of her bladder and this whole meeting was taking much longer than she expected.
To her relief, Christian finally interrupted his lawyer in mid-sentence. “Let’s take a quick break. I could use some coffee.”
Melanie smiled at him gratefully, then escaped to the nearest ladies’ room. Having taken care of necessities, she stood in front of the sink, washing her hands. As she dried them, she took a hard look at herself in the mirror.
Her belly was enormous now, the baby due in just two weeks. Aside from that, she thought she looked well enough in her simple, navy-blue maternity dress, though it seemed to her critical eyes that the glow that pregnant women were supposed to have somehow seemed to have skipped her.
She imagined that it was because she was pretty tired. They’d been at this all morning, and she was frankly exhausted. Of course, it was much better than her last experience with one of her stepbrother’s lawyers.
Melanie sighed, recalling the events of the past nine months. Her former stepbrother, the dashingly handsome and incredibly wealthy business magnate, Christian Evans, had come back into her life unexpectedly, eight years after Melanie and her mother had been banished from the Evans family. Just as unexpectedly, Melanie found herself seduced by her stepbrother, giving into long-buried feelings for him, melting in his arms and making love with him.
This, of course, had led to her entirely unplanned pregnancy, a pregnancy she’d hid from him for months, not wanting to seem as though she was using the baby as an excuse to get her hands on some of the Evans fortune. Not wanting to be the opportunistic gold-digger her own mother, Beverly had been …