You are here: Products Her Soldier’s Touch by JM Stewart 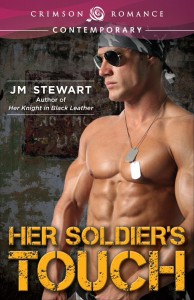 Her Soldier’s Touch by JM Stewart

Experience has taught single mother Rachel Madison that the only person she can truly rely on is herself. But what she wants most in the world—to give her son the life she never had growing up—means she must put her faith in a man who once walked out on her.

Retired from the service, U.S. Army Sergeant First Class Colten Taylor makes a detour to Phoenix to bury his brother. Nobody is more surprised than he is to see Rachel waiting for him at the airport. He regrets the morning he walked away from her, but coming from an abusive home taught Colt to put limits on all his relationships—especially this one.

So when he discovers he has a son, Colt knows this is a chance to prove to himself he’s not a chip off the old block. Turning his life around doesn’t come naturally, though. Then a drug dealer crops up from his brother’s dark past, threatening their son and forcing Colt and Rachel to face their demons … and each other.

JM Stewart writes passionate, heartfelt contemporary romance. She’s a wife, a mother, a spiritualist, and lover of puppies, and happily addicted to coffee and chocolate. She lives in the rainy Pacific Northwest with her husband, two sons, and two very spoiled dogs. She’s a hopeless romantic who believes everybody should have their happily-ever-after and has been devouring romance novels for as long as she can remember. Writing them has become her obsession.

When I originally started this book, it began as a sequel to another, published, book. As I wrote, however, it took on a life of its own. As I got to know the characters, I began to realize we had something in common. Both come from difficult childhoods, so the book deals with issues close to my heart: drug and alcohol addiction, physical and emotional abuse, abandonment and neglect. I didn’t intend for it to be that way. My characters are who they are. But once I realized it, I used my own experiences to add a level of realism and emotion to the story.

“Maybe I do it to protect you. Did you ever think of that? I don’t do relationships, Rach. You’re better off finding someone who can give you what you need, because I’m not that man.”
That damn stony wall made her want to hit him just to see him react.
She clenched her fists. “Coward.”
Colt’s head jerked in her direction. His gaze seared into her as he studied her.
“I don’t need your protection.” She glared at him. “I’m perfectly capable of looking out for myself.”
He turned his body fully toward her and copied her stance, folding his arms across his chest. “All right. You really want to know what I’m thinking? Telling me you want me because our son needs his father wasn’t what I hoped you’d say. I wanted you to tell me you wanted me. But, I know damn well I have no right to want that, for exactly that reason … I walked out. And, for the record, I didn’t tell you all that stuff that night to scare you. I was being honest.”
His body heat radiated against her side as he closed the distance between them, stepping into her personal space then taking another step, until his scent of soap and man washed over her and his firm body brushed hers. His voice lowered to a husky murmur, his breath whispering across her cheek.
“More than I should have been. Those eyes of yours pull things out of my mouth I shouldn’t say. You’re my ultimate weakness, sweetheart.”