You are here: Products Her Private Show by Holland Rae 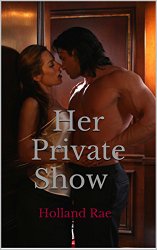 Her Private Show by Holland Rae

When workaholic Manhattan journalist Olivia Hudson is assigned to do a story on a male-strip-show for charity she’s anything but pleased. Begrudgingly, and with the promise of covering the story she’s really looking forward to, she agrees – but nothing could have prepared her for the show’s producer and lead dancer, Benjamin Locke.

Ben finds himself inexplicably drawn to the all-professional reporter, partially because he loves a good challenge. And when co-dancer Tony mentions a bet, Ben goes all in. He goes in planning to seduce her body, but maybe, just maybe, he’ll end up reaching her heart – and his own.

She is an avid writer, and has been for years, studying at Emerson College, with writer’s retreats at Kenyon College, Duke University and Simon’s Rock. She loves to travel, and spent her semester abroad living in a 14th century castle in the Netherlands. In her free time she enjoys dreaming up stories, eating spicy food, driving fast cars and talking to strangers.

The best part about writing this story, however, took place about a month into writing. I was in Vegas for a work convention, and got pulled into a Chip & Dale’s photo booth on Fremont St. Long and short of it, one of the dancers told me he got off at midnight, and asked if I’d like to come by. Given that one) I am in a loving and committed relationship, and two) I was with my boss, who happens to by my father, midnight came and went and I left the beautiful man to his own devices. But it makes for a fun story, and certainly added to “Her Private Show” (especially the naughty bits!)

A few minutes passed before the mad rush of sound and excitement filled the locker room just outside of the door. She’d missed her chance for escape – acted on a fool’s impulse of fleeting bravado, and now she was going to have to see it through. Since getting this stupid assignment she’d been doing and saying an awful lot of non-Olivia-like things.
Speaking of saying, she realized, in distant horror, what in the hell was she going to say when Ben walked into his office and saw her standing there, leaning against his desk like she had any right to be? Ask for a post-show interview? Pretend she was asking for a post-show interview?
She really should have asked Molly how to go about seducing the attractive lead and producer of a male-strip show, but she hadn’t known she was even going to bother coming backstage until she got possessed by the crazy bug and snuck into his office.
Her internal rant was interrupted, however, by the creaking of the handle and the slow movement of the door. She took a deep breath and willed whatever was going to happen to happen.
If Ben was surprised to see her in his office, the tight purple dress a replacement for her professional business attire, the completely at home look on her face as she leaned against his desk, he didn’t show it. He simply hung his shirt up on a peg, exposing the thick, hardened muscle of his upper body, far closer to her sight than it had been onstage, and said,
“So you liked the show, then?” The vaguest hint of his accent slipped through, the cracks of amusement apparent in his low tone. Outside she head the locker room begin to quiet as the dancers started to leave.
“What makes you think that?” She asked him, with far more confidence than she actually had.
He turned and offered her a lazy smile, one that sent electricity running through her blood and fire lighting in her veins. “I could write a bad review – you never know.” Neither of them mentioned the small detail that she really couldn’t write a bad review.
“You wouldn’t be here right now if you were writing a bad review,” he responded, “though I could beg you to change your mind, if you’d like me to.” His voice was so impossibly low, resonating and delicious within, that Olivia nearly closed her eyes, simply to let his tone wash over her. But she didn’t – she needed to stay on top of her game here.
“I don’t get the impression that you’re the begging type,” she replied, eyeing him, perhaps far more than strictly necessary, though that was certainly up for debate in her mind.
“I’ll beg,” Ben said, walking towards her, “if the stakes are high enough.”