You are here: Products Her Mistletoe Cowboy by Alissa Callen 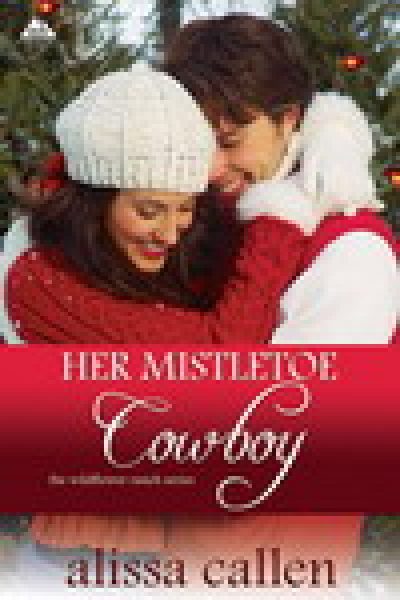 Her Mistletoe Cowboy by Alissa Callen

Corporate analyst, Ivy Bishop, intends spending Christmas holed up in an isolated Montana ranch house with only an abandoned puppy for company. When the festive season ends her broken heart might just have had just enough time to heal.

Ex-rodeo rider, Rhett Dixon, has put his playing days behind him. He has something to prove. Despite being the first son in three generations of ranchers, he is determined to succeed in ranching on his own merits.

But when Rhett’s new neighbor proves to be far-too-pretty and far-too-compassionate, his single-minded focus deserts him. And the more time Ivy spends with the workaholic, blue-eyed cowboy next door the more she realizes her heart isn’t actually broken – yet.

When Alissa Callen isn’t writing she plays traffic controller to four children, three dogs, two horses and one renegade cow who really does believe the grass is greener on the other side of the fence. After a childhood spent chasing sheep on the family farm, Alissa has always been drawn to remote areas and small towns, even when residing overseas. Once a teacher and a counsellor, she remains interested in the life journeys that people take and her books are characteristically heart-warming, emotional and character driven. She currently lives on a small slice of rural Australia.

I am an Australian country-girl who used to live in the Rocky Mountains. I love all things rural – from cowboys, to cattle ranches to rodeos.

He had company.
The crunch of snow behind Rhett Dixon confirmed what the flicker of the bay mare’s ears told him. He wasn’t alone. He finished tickling the sweet spot on the horse’s neck as she rubbed her head against his jacket. Faithful old Cherry loved her daily scratch.
From over his shoulder, the icy breeze brought the faint scent of vanilla. He frowned. His unexpected visitor was female. But it couldn’t be his childhood friend, Payton Hollis. Perfume wasn’t exactly on the working cowgirl’s ‘must wear’ list. It also couldn’t be his sisters. Peta and Kendall now phoned before they’d arrived to make sure he’d have a fire lit. He hadn’t heard the last of their complaints that they’d gotten frostbite from his arctic log cabin.
The mare, happy she’d been spoilt enough, lowered her head to the hay Rhett had delivered. He glanced at the big buckskin gelding to his left and, satisfied Tucker wouldn’t poach Cherry’s portion, he eased the weight off his right leg readying to turn. The twinge in his knee reminded him why he lived on a high-country ranch so isolated he’d only ever had two visitors. Well, if his sisters even counted as guests.
He turned.
The ache in his knee faded. The cold biting his cheeks receded. The grief that never left him, dulled.
Yes, his visitor was female. But not local.
His breath expelled in a dense, white cloud.
She was also … beautiful. Knock the wind from your chest beautiful.
And cold.
Her arms hugged her torso and snow glistened on the fawn-brown hair that fell from beneath her fur-trimmed hood. Lips, that should have been pink, were pale, and from the shadows beneath her eyes he wondered if something else besides the glacial temperature leached her of both warmth and color.
He made his way through the wooden gate toward the stranger.
“Hi there.” His gloved hands flicked over the buttons on his sheepskin jacket. “It’s not the best day to be out and about.”
The woman might be wearing a long black jacket but thanks to his sisters he knew the thin outer wear was more of a fashion item than functional.
“Hi. Yes, I know. My feet feel like two ice bricks.” She shifted from one high-heeled black boot to the other in an attempt to beat the cold seeping through her thin soles. “Sorry to bother you, but I need a hand.”
Her smooth and cultured words confirmed she should be in a heated city condominium and not out in the winter weather of the Montana mountains.
Rhett shrugged out of his coat. Ignoring the wind gust that delved beneath the collar of his thick plaid shirt, he offered the woman his jacket.
“No problem. Here … take this. Has your car broken down?”
She shook her head and made no effort to unfold her arms and take the coat. It hung suspended between them. Used to stubborn sisters, without thought he stepped nearer and draped it around her.
Big mistake.
He was so close he could see the creamy texture of her skin and the silken length of her dark lashes. He could smell the now stronger scent of vanilla mixed in with something sweet. Orange? He could also see the flash of spirit in her hazel eyes as she stepped side-ways so the heavy coat slipped off her narrow shoulders and back into his hands.
“Thanks. But I’m fine. You’ll need your coat.”
He nodded, knowing it would be futile to argue. Her firm tone made it obvious she might be out of her urban comfort zone but she was no helpless city girl. His independent elder sister, Peta, had taught him well. It was a brave man who’d override the wishes of a woman with a tilted chin. Even if that woman was pint-sized and barely reached his jawline.