You are here: Products Her Detective Dragon by Alice Summerfield 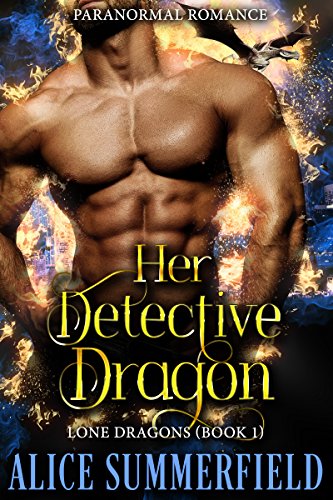 Her Detective Dragon by Alice Summerfield

Lone Dragons don’t have soul mates, but storm dragon Grissom thinks that he might have found his hiking down a lonely stretch of road during a thunderstorm. And she’s up to her neck in trouble. A steamy romance between a Latina barista in over her head and a police detective, Her Detective Dragon is a standalone novel with 15 reviews and a 4.2 star rating.

Alice Summerfield loves to write! She also loves swimming, plot, black tea sweetened with orange peel, and baking. She has a weakness for dopey black labs, feral black cats, and rainy days. And reading. She owns a shocking number of books. On any given day, she can be found sitting in the sunshine as she plots out exciting adventures for her brave heroines and the men that love them. Smokin' hot romances and strong plots abound here!

She was wet. She was cold. And she was utterly filthy.

Of course that was when the handsomest, kindest man that she had crossed paths with in awhile would stop to offer her a lift. It was so unfair. Ana wondered, half despairingly, who or what she had offended that she was doomed to have such terrible luck.

Her voice still heavy with tears, Ana said, “No, thank you. I’m fine.”

Her would-be rescuer snorted. “I’m sure you are,” he said.
Between the flashes of lightning and the shadows thrown by the SUV’s weak dome light, it was impossible to say for certain, but Ana thought that his eyes were lingering on her. Whether he was admiring her muddy self or her sodden everything, she couldn’t tell.

Between the driving rain and the terrible lighting, it was impossible to see much in the way of details, but everything that she could see of the stranger was trim, fit, and muscular. He had dark hair, shadowed eyes, and a strong jaw line. Under almost any other circumstances, Ana would have been very happy to see him.

Instead, she only felt misery and embarrassment.

He looked so good, and she probably looked like that creepy little girl from The Ring, except older and heavier. There was absolutely no way that her dress, originally carefully selected to emphasize her strong points and hide her weak ones, wasn’t currently betraying her every flaw to the handsome stranger’s no doubt handsome eyes. And hunching over probably wasn’t helping anything.

Forcing herself to straighten up, Ana said stiffly, “I can walk.”

That was a blatant lie, but she had already made too many stupid mistakes that night. Ana wasn’t about to make another one. Getting herself murdered because her feet hurt and the man offering her a ride was unfairly handsome would simply be too much.

But somehow, turning down the offered ride made her feet hurt worse. It was like they knew.

Ignoring her stupid feet and their stupid throbbing pain, Ana started walking again. Well, she tried to stalk away with her dignity intact. Her shoe was sunk so far down in the mud that when she stepped forward, her foot came out of her once pretty little shoe.

Hastily, Ana stuffed her bare foot back into her high heel, her toes squelching in the mud that had somehow founds its way into the shoe in her foot’s brief absence from it.

“It’s not like that,” chided the man, the pleasant baritone of his voice immediately drawing Ana’s attention back to him. “I’m no creep. I’m a police detective.”

Ana squashed her first response – which was complete and utter relief that she might be rescued – and tried to be more suspicious. She always trusted everyone, and look what that had gotten her.

If she had been more suspicious of Rodney, she probably wouldn’t have ended up in this situation in the first place: cold, wet, hungry, alone on a practically deserted stretch of road, and now effectively stuck in place there. There was no way that she was going to walk barefoot down the side of the highway. Who knew what people tossed out of their windows as they zipped by?

“Look,” said the man, and Ana could barely hear him over the frantic patter of her heart. “If I show you my badge, will you let me give you a ride somewhere?”