You are here: Products Her Deluxe Dragon Detective by Alice Summerfield 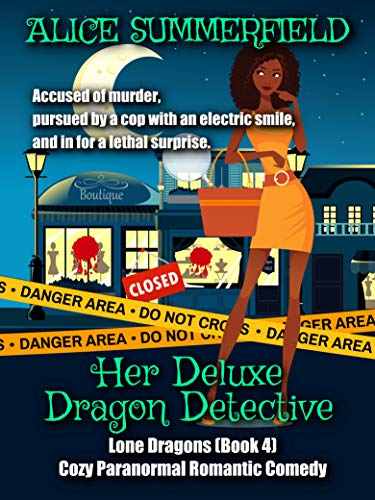 Dragons don’t have soul mates, but Derek has found his. Too bad he’s a police detective, and she’s just been accused of murder.

Gabriela is nothing if not unlucky at love, but her ex-fiancé turning up murdered is beyond mere bad luck even for her. If Gabriela doesn’t wise up and fast, this murder rap might just be the death of her.

If you like cozy mysteries, paranormal romance or romantic comedy, don’t miss this exciting read!

Alice Summerfield loves to write! She also loves swimming, black tea sweetened with orange peel, and baking. On any given day, she can be found sitting in the sunshine as she plots out exciting adventures for her brave heroines and the men that love them. Smokin' hot romances, strong plots, and no cliffhangers!

Turning, Gabriela found herself looking down at the most gorgeous man that she had ever laid eyes on… and Ana’s fiancé. Grissom was there too, she guessed.

Guess, because she couldn’t seem to rip her gaze away from tall, blond, and handsome. He was slightly shorter than Ana’s Grissom, but he was broader across the shoulders. And when he smiled up at Gabriela – well, okay, at all of them, but Gabriela couldn’t shake the hope that it was mostly for her – it was like getting struck by lightning.

<i>They must have come straight from work,</i> decided Gabriela, who was feeling slightly light headed. She didn’t know if it was from getting hit by that smile or because of how good that man looked in his charcoal grey suit. Maybe it was a little bit of both.

The groom greeted the bride with a quick kiss, his arm snaking around her waist, and then introductions were made. The impossibly handsome man turned out to be Grissom’s partner at the police station, a Detective Derek da Luz.

Gabriela sent up a quick prayer that paid detective or not, Detective Drop Dead Gorgeous wasn’t detecting how completely into him she was. That would have been embarrassing; and also a disaster, because Gabriela didn’t fall for people who were good or nice. As exhibit one, see Rance Pittz.

Since there were now so many people that didn’t know each other, introductions were still being made.

Ana had just said “And this is my sister, Gabriela,” when Derek da Luz took Gabriela’s hand in his. Gabriela’s skin prickled and her palm stung. The touch of Derek da Luz’s hand to hers was like getting struck by lightning.

<i>Static electricity,</i> Gabriela realized a moment later, when Derek yanked his hand back.

“Sorry,” said Derek quickly. He sounded strangely apologetic.
“It’s alright,” said Gabriela, just as quickly. She caught his retreating hand with her own and gave it a firm shake.

His touch was just as electric the second time around.