You are here: Products Hell and Half of Texas by John Spiars 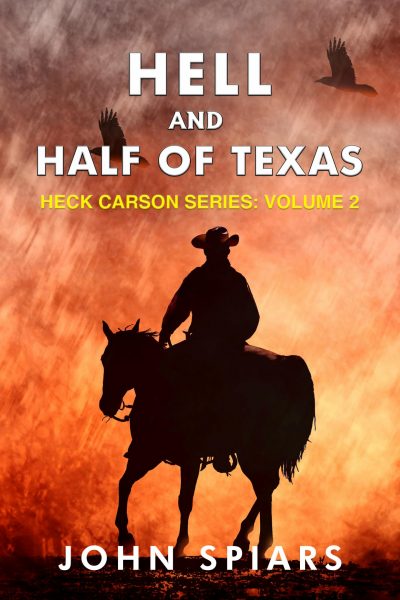 Hell and Half of Texas by John Spiars

Writing in the style of Louis L’Amour, Larry McMurtry and William W. Johnstone, Best-selling western author John Spiars, author of Riders of the Lone Star, returns with Hell and Half of Texas, the second novel in the Heck Carson Series.

Seeking a greater adventure than bringing law and order to the untamed Texas frontier, Texas Ranger Jesse “Heck” Carson, along with his friend, Tommy Jergsen, enlist in the Confederate Cavalry. They are placed in a special unit tasked with stopping the murderous Jayhawkers who have been carrying on a guerilla war against civilians in Missouri. Heck and his men face the expected horrors of war, but what they didn’t expect was to find themselves in the middle of a private war where they don’t know who to trust and where the lines between friend and enemy mean nothing. In order to do what is right, they must make decisions that will forever change the course of their lives and which thrusts them into a battle far more violent than anything they ever expected.

JOHN SPIARS is the author of Riders of the Lone Star, Hell and Half of Texas, Bound for Vengeance and his BRAND NEW RELEASE Blood Trail, the first four novels in the Heck Carson Series as well as Bury me at Palmetto Creek, a western supernatural novella. He is a western writer and amateur historian with a passion for telling the stories of the American West. In his novels, he combines his love of "Old West" history, Texas history, and telling an entertaining story, while also staying true to the people who forged this country out of a lawless frontier. He is a native Texan and continues to live in North Texas with his wife and four children. John is also a member of the Western Writers of America. When not writing novels, he maintains a blog dedicated to Texas history, food and travel at www.underthelonestar.com and Facebook page of the same name. John is currently working on Volume 5 of the Heck Carson Series. For upcoming book releases and promotions as well as book excerpts, subscribe at www.underthelonestar.com Follow John Spiars on Facebook: underthelonestar

WIth a love of the old west and Texas, I wrote The Heck Carson Series for my enjoyment of the western genre and hopefully for the enjoyment of others as well.

Heck positioned himself just below the ridgeline where the declivity offered protection and a perfect line of fire on the enemy as well. Drawing a bead on one of the warriors, Heck opened fire, dropping one, and then two of the braves. Several were grouped together, and made too tempting a target for Heck to pass up. Firing as fast as he could lever a fresh round, Heck’s bullets found their mark, sending two of the Indians over the edge of the cliff and to their deaths, two hundred feet below.

With nowhere else to go, the Jayhawkers began diving over the bank to the creek down below. It was a dangerous height to jump from, but it was better than facing the deadly fire that was claiming so many of their comrades. Heck continued firing at the fleeing men and brought down one more before the sound of a bugle diverted his attention. “It’s the Federals, boys,” Heck heard a voice call out over the gunfire and sounds of the dying. He spun his horse around in the direction of the approaching army, and got off three quick shots. His bullets found their mark, and two men fell from their horses. After hitting the ground, they were instantly trampled under the hooves of their comrades’ horses.

As he spurred his horse forward, his head began to spin, and he felt an intense burning in his gut. Looking down, Heck noticed that his shirt was soaked in blood, and the burning sensation became almost more than he could stand. He guessed that kid hadn’t been as bad a shot as he had thought, and suddenly Heck didn’t feel quite so bad about having killed him.

While he tried to figure out how the five of them would fight off a whole company of soldiers, the train exploded in a flash of blue and orange flame, that sent pieces of wood and steel flying in the air. The blast killed many soldiers, evidenced by the body parts that littered the terrain for fifty feet in every direction. The dynamite had evened the odds somewhat, but Heck still counted ten men on horseback headed up the slope toward him.

Heck dug his spurs deeply into his horse and raced towards his friend. He grabbed his knife from his boot and stood up in the saddle. With knife in hand, Heck waited until the last possible moment and then leapt forward. Grabbing the rope with one hand, he slashed at it with his knife, and both men fell to the ground hard. Standing over them, however, was the remaining soldier. With an evil grin on his face that seemed strangely out of place given the young man’s age, he pointed his pistol at the two men. Calmly pulling the hammer back, the soldier gave a wink and pulled the trigger.