You are here: Products Heired Lines by Magan Vernon 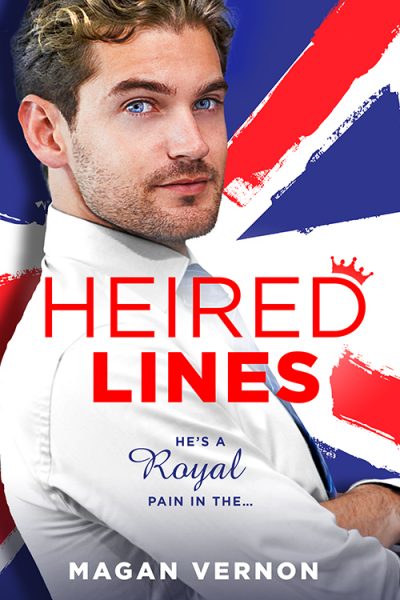 Sometimes, you’ve got to take a job with the devil to pay the bills…

Too bad I learned too late the devil wears Armani, is the most uptight man in the history of history, and I just signed an unbreakable contract shackling me to his pompous royal side for the summer.

But God, he’s got this British accent that makes my panties melt.

Until the words he says catch up with my brain and make me want to throw one of his precious vases at his head.

One minute we’re fighting—and the next—we can’t keep our hands off each other. Because somehow, when Mr. Blue Eyes is kissing me, he makes me forget how much he annoys me.

And that starts a whole new level of complications I. Don’t. Need.

Cuz if you dance with the devil, someone’s gonna end up getting burned…

Magan Vernon believes that no matter what your story is, everyone deserves a happily ever after and tries to include that in all of her stories. She's had top 100 stories in everything from YA aliens to angsty New Adult tales.
When not writing, you can find her on her Texas ranch, trying to wrangle two kids, two dogs, and a colony of whatever other kids or animals ends up in her yard.

Find her online at www.maganvernon.com

I was watching an episode of Queer Eye where a man had inherited his great aunt's house that hadn't been updated since the 1970s and he hadn't updated it either. It made me think, what if a royal man inherited a great aunt's castle and it was full of junk but junk he couldn't get rid of it since it was all historical?

“Um, can I, uh, start with a water and get a food menu? And, um, do you have an outlet or someplace to charge my phone?” I held up the dead device, putting on my best smile, though my lips trembled as a nervous laugh escaped.
The bartender rolled her eyes before glancing at the row of full barstools. When she turned back to me, I swore she scowled, her mouth open and ready to tell me to shove my phone somewhere.
But before she could say anything, a slim phone slid across the counter, and the hulking frame of a man scooted into the seat next to me.
Okay, maybe hulking wasn’t the right word, but at my five-foot-two, he was at least a foot taller than me. Unlike me, he wasn’t soaking wet. He wore a crisp suit, molding to his broad shoulders. Then that face, like it was chiseled with a bright white row of straight teeth, a hint of stubble on those high cheekbones, brilliant blue eyes, and tousled, sandy blond hair. He was the opposite of my drenched-rat look.

“Here, you can use my phone,” he said in a commanding voice with an English accent that practically purred.
I would have taken it if I actually remembered the phone number and not just saved it in my dead phone.
“That’s okay. I just need a quick charge to call my ride,” I said quickly, forcing a smile so I would at least seem polite.
He didn’t miss a beat, his gaze still focused on me as he slid his phone back in his pocket. “Your ride may be a while. Most of the roads are flooded, unless she lives in town.”
“I think it’s a he who lives in town, and I’m not exactly sure where he lives.”
He arched an eyebrow, a small crack in his beautiful exterior. “So you have someone picking you up, but you don’t know where he lives? Let me guess, you don’t know his phone number or what he looks like, either, so really, he could be an ole bloke in this place.”
My entire body tensed as I glanced toward the bar, hoping maybe the bartender would come to my rescue with some free peanuts and a charger. But, of course, she was chatting up another set of patrons, not even glancing in our direction.
Way to save a girl from random pub dude.
Really attractive random pub dude, but still.
“I was hired to help out this guy clean out his family’s estate. I’m a historian, and he needs help with some of the older pieces on the property, so I’ll be curating them.” I sat as straight as I could, trying to add as much confidence as a girl with soaking wet clothes could to her voice and appearance.
He smirked, a breathy laugh escaping his nose. “So you met a man online who offered you a position in England to clean out his family’s place, not knowing anything about him, and yet you came? This sounds like one of those catfish TV shows you Americans love.”
I slumped involuntarily as I put my hands on my hips, ignoring how heavy my wet blouse was as it dragged my arms down. “I did do an internet search on this guy I’m supposed to meet. He doesn’t have any social media presence, and the only photos I found of any Gavin Webleys were of an old man cleaning shotguns.”
The man in front of me just smiled, not saying a damn word.
It was the bartender who cleared her throat, and I turned to face her, finally trying to control my breathing after I spit everything out to the smirking guy next to me.
The woman pushed a glass of water and a phone charger across the counter. “Here ya go, love, but if you really are looking for Lord Gavin Webley, I don’t think you’re going to need the charger.”
I stiffened, licking my lips, before I tried keeping my voice and posture steady.
Did she just say Lord? As in nobility? “Did he call into the pub?”
She shook her head then nodded toward the well-dressed man next to me. “Can I get you anything, Lord Webley?”