You are here: Products Hearts Unloched by Claire Gem 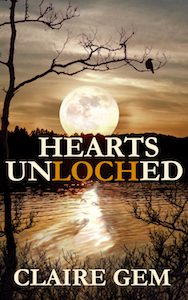 A psychic interior designer reluctantly agrees to renovate a sexy investor’s abandoned hotel on Loch Sheldrake, a lake rumored to have once been the mob’s body dumping ground.

Interior designer Kate Bardach loves her single girl’s lifestyle, living in Manhattan and spending weekends at her lake house. She’s passionate about her career, too—reinventing old buildings. But there are some projects she can’t take on because of the spirits trapped inside. Kate is psychic—she sees dead people.

Marco Lareci is one of Wall Street’s most successful investment brokers who’s achieved all of his life’s goals—except for finding his soulmate. His latest project, an abandoned resort on Loch Sheldrake, needs a savvy designer to transform the crumbling complex into a boutique hotel. When Marco meets Kate, he can’t believe his luck. She’s the perfect match for his business and his heart.

Marco’s body excites Kate even more than does his renovation project. But he wants more than a casual relationship, and she’s not willing to give up her freedom. Plus, the haunting at Marco’s resort, a bonafide poltergeist, affects her on an intensely personal level. Kate’s aunt disappeared from the place fifty years ago.

Will the spirit doom Kate and Marco’s love, or drive them closer together?

She writes in two genres: romance w/a ghostly twist, and sexy contemporary. Claire’s books are like a thrill ride at a theme park. Whether it’s spooky-scary, angst-ridden relationships filled with gut-wrenching turmoil, silly chuckle moments, or hot-flash-inducing sex, Claire guarantees to take you on an emotionally intense romantic journey.

If you enjoy romantic suspense with intensely emotional plots, you have found your author. I hope you enjoy Hearts Unloched, and will look for my next paranormal romance – ghost story, Spirits of the Heart, coming later in 2016. And become another of my super fans. 🙂