You are here: Products Heart’s Song by Charity Parkerson 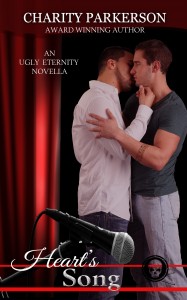 Hawke swore one day he’d hate Maddox for using him…

Maddox, lead singer of the band, Ugly Eternity, is a man of many secrets. Unfortunately, Hawke isn’t one of them. He’s been openly using Hawke for his delicious body for over a year, taunting him with a half-life, and always giving him just enough hope to keep him hanging on.

Even though Maddox knew Hawke would one day grow tired of his games, Maddox never expected how thoroughly the other man would cut him from his life. Left with no other recourse, Maddox is forced to live on Hawke’s terms to have any chance of reclaiming Hawke’s heart.

But in Hawke’s determination to rid himself of the sexy singer, he failed to consider one major detail—he belongs to Maddox.

Charity Parkerson is an award winning and multi-published author with Ellora’s Cave Publishing, Indie Publishing House LLC, and Punk & Sissy Publications. Born with no filter from her brain to her mouth, she decided to take this odd quirk and insert it in her characters. *Winner of 2, 2014 Readers’ Favorite Awards *2014 Golden Ankh Nominee *2013 Readers’ Favorite Award Winner *2013 Reviewers’ Choice Award Winner *2012 ARRA Finalist for Favorite Paranormal Romance *Five-time winner of The Mistress of the Darkpath

“Are you getting all this?”
Hawke dipped his chin. “No.”
A burble of laughter escaped Sophie before she covered her mouth, muffling the sound. A middle-aged woman, checking her mail nearby, glanced their way. Hawke winked, making her blush and look away. “That’s not fair,” Sophie whispered. “You shouldn’t use your looks against women.”
Hawke blinked. “What?”
“Don’t play dumb. You’ve always been too pretty for your own good.”
Shoving his hands in his pockets, Hawke eyed Sophie while trying to think of a way to respond. He didn’t think anyone had ever accused him of such a thing.
She sighed. “You honestly don’t know what I’m talking about, do you?” She shook her head. “Sad day. If I were half as gorgeous as you are, I’d have a brand new car sitting in my driveway and I’d never work another day.”
He couldn’t decide which part of her statement he found the most ridiculous. Probably the part where she’d left out how, except their hair color, they looked quite a bit alike. Instead of pointing out the obvious, he decided to attack the second half of her claim. “You’d also have some crazy dude beating on your front door, screaming ‘Bitch, I bought you a car’ every time he didn’t get his way.”
Sophie shrugged. “True, but everything has its drawbacks.” She pulled open a drawer on her desk and handed him a set of keys. “These go to the maintenance van out front. Now, quit giving false hope to unsuspecting women and get to work.”
He saluted before moving to do as she bade. “Yes ma’am.” Her chuckle followed him out the door. At least he had one person in the world who cared. It was more than some people had.