You are here: Products Heart of the Gladiator (Affairs of the Arena) by Lydia Pax 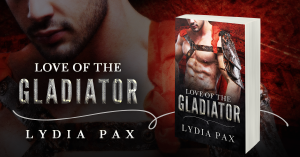 Heart of the Gladiator (Affairs of the Arena) by Lydia Pax

“His love was rough, but it could not be tamed… or denied.

Aeliana hates gladiators. They’re crude, violent, arrogant, and will toss the skirts up of any available woman after a fight. It may be her job to treat their injuries, but she has no interest in being just another conquest.

So, when the former gladiator champion Caius arrives in her life, she is stricken by how immediately she falls for him. He’s a merciless killer in the arena, not at all her type. But he’s also damnably handsome, built like a god, and turns Aeliana on like nothing she’s felt before.

Being with a gladiator is always a bad idea. Even if they’re known the Empire over for the intensity of their bedchamber passions, they have a lifespan about as long as a sword. Aeliana’s convinced that there’s no way that someone who could have any woman in Rome would want to stay with her for long. But his affection, while rough, seems completely genuine. Caius’s return to the arena is shrouded in mystery, but the more Aeliana discovers, the more she falls in love. When his lifetime of violence catches up with them both, Aeliana must decide whether she can afford to bare her heart to a man so effortlessly dangerous. As it becomes obvious that their love shouldn’t be, Caius and Aeliana fight the odds like warriors in the arena.

Aeliana’s strength will be tested again and again, along with their love. But it is her strength that will win the heart of a gladiator.”

In college, I studied English and History and earned a degree in both, following up with an M.F.A. in Creative Writing. I love writing for imagining complex characters, discovering intricate worlds, and crafting plots that get readers’ hearts racing.”