You are here: Products Heart of Crystal by Lauren D.M. Smith 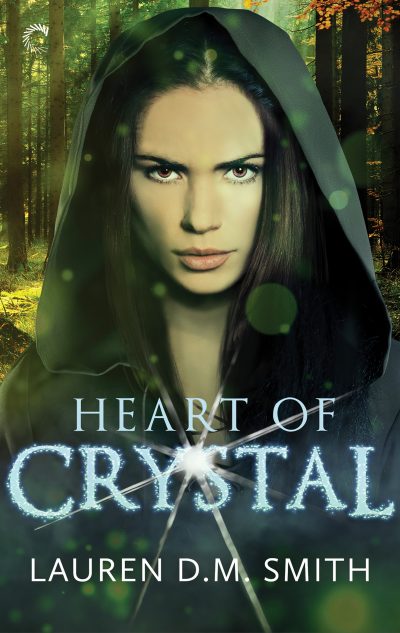 Ever since her family was kidnapped, Azara, a woman of fire mage stock, has survived with a warrior's will and the hope of one day finding them. Whispers of their fate have finally led her to the Empire, where her brother and sister are now prized possessions of His Celestial Majesty's court. Unable to immediately negotiate their freedom, Azara reluctantly agrees to the Emperor's suggestion: accompany his devoted magus Jin across their rival's border in search of other fire mages while her siblings remain in the Emperor's hands.

Posing as married tea merchants, Azara and Jin's masquerade begins. For a fierce young woman devoted to a heartening cause, and a man beholden to his duties, it's an uneasy alliance—but one that quickly turns passionate.

It's also a dangerous proposition, for although the attraction between Jin and Azara is real, both the Emperor and Azara have ulterior motives. It's only when Azara explores her unique powers and puts her faith in Jin that their fight for family—and for their very destiny—can succeed.

I'm a huge geek, book fiend, and someone who refuses to grow up (Popcorn for dinner is a perfectly legitimate decision. As is sliding down banisters). I have a bad case of wanderlust that has taken me all over the world, I've lived in three countries now and visited many more. This has also led me to have a rather…eclectic series of jobs up until now.

I have finally settled down in a small village just outside of my hometown with my long-suffering husband and our daughter. He puts up with my bouts of insanity and fan-girling and he even tolerates me forcing him to cosplay.

Right now I work in Brockville in marketing/events and spend most of my free time reading, writing, binge-watching shows, or swearing up a storm while playing video games.

I was reading about the opium wars between China and England, and it kind of sparked the world. I'd had the idea for Azara's powers rattling around my head for years, but never had the right setting for them. The world was the last piece I needed to take off running.

“…and if you follow the road straight, you’ll eventually reach Pocale.” Azara pointed towards the horizon where the rutted road was swallowed by the dark smudge of trees that stood out amongst the gentle hills. The crossroads they stood at was empty, as was the scenery in every direction, making everything seem quieter in contrast to where they’d come from. “Find somewhere to settle that’s away from the borders and keep your magic hidden, and you’ll probably be okay. Small towns are good, bigger cities are not so good.”

Turning to Fiame, Azara found her hand caught in the grasp of the older woman. Dark eyes wavering, the circles under her eyes thankfully lighter after a few days, her rough-cut hair, scratches and pink of new scars told their story. “Thank you. Thank you with every fibre of me. I can’t—What you’ve done, you’ve saved us. Both of us. I can never repay you.”

Azara smiled while inwardly she winced. Her eyes flickered to Fiame’s son, the boy only five or so, his eyes wide though he stayed silent. She didn’t want to think about what he’d had to witness. Slavery was bad enough in most places, but it was so much worse for their kind. “I didn’t set out to save you. I’m searching for my family, and so I chase rumours of enslaved fire mages. You’re just the latest ones I found.”

“But you didn’t leave us. You could have, but you didn’t. That’s why you have my undying gratitude.”

She looked away from Fiame’s gaze and shifted her weight to her back leg. She didn’t want to explain that by the time she got close enough to see most fire mages’ faces, she was generally far enough in that fighting her way out was nearly a certainty. It simply made sense to break out the fire mages for the help.

Of course, her mind also liked to superimpose her family’s faces over the mages she found whenever she did have the option to leave. Not that she could. Memories rose of running through the trees, her breath loud in her ears, the heavy footsteps and shouts of the men pursuing her sending jolts through her as her heart raced. Burning lungs, scored lines from branches too close to duck, muscles screaming from the strain, she had no time, no escape, too far to get home. She had to—

She blinked and refocused on Fiame, who had released her hand. Azara forced a pleasant expression onto her face again as she shoved the memories of the slavers away. That had been a long time ago, and she wasn’t a scared child anymore. “My apologies, my mind went elsewhere. You said something?”

Fiame jerked her chin over her shoulder towards where the other road took a dip into a small hollow before rising up over the largest hill in the area. “If you’re looking for fire mages, the…the people who were going to sell us said they were considering Nalbin.”

Azara’s eyebrows rose. “Nalbin? Not Shi Guo? I’ve heard the Empire is always on the hunt for fire mages, and that the emperor himself collects them.”

“No, they definitely said Nalbin. I’m not sure if that’s of any help to you, but if there’s anything I can do for you…”

Fiame was still fragile, still scarred mentally and physically, so Azara had to tread lightly. It didn’t help that Fiame’s husband hadn’t survived the fight with the slavers so she was left alone with her son. Azara hoped she would eventually be able to live with what had happened. “I hadn’t heard that rumour, and I’ll keep it in mind. If things don’t work out in the Empire, I’ll see about Nalbin next. They do border each other. As for what you can do for me, there is one thing.”

Fiame leaned in, face tight, eyes brighter than ever. Azara flicked her gaze over to the boy then to his mother. “Raise him right. Teach him to be strong and how to protect himself. Raise him so he doesn’t have to, but that he can if necessary. As much as you might want to forget about it, train him to use his powers. Too much is lost because we try to suppress our powers for safety.”

The older woman opened her mouth and glanced at her son. After a few moments, she nodded. “I can teach him in secret. It may be dangerous, but it could protect him in the future.”

“Power untaught is more dangerous.” A sudden thought had Azara digging in one of the side pouches of her pack. She pulled out the small tinderbox and handed it over to Fiame, who stared at the thing, her forehead creased.

Azara didn’t let her finish. “It’s for starting fires. Of course, an ordinary woman and her son travelling would need something like this for the cold nights or so they can have hot food.”

Fiame’s eyes widened, a faint smile pulling at her lips. Azara answered with something stronger, glad she’d caught on. “Now, you’d best get going. You should be able to get through the forest before dark and you’ll just be a day’s walk from Pocale.”

“You’re sure you won’t come with us?”

“No, I need to keep moving. It’s better for me in case anyone survived and is looking for revenge. They’ll focus on me, and having us split will make it harder for them as well. As I said, I’m aiming to see if the rumours about the Empire and emperor are true. You’ll be safe enough once you’re in Pocale. They don’t hold with slavery. You’ll get outsiders who will try, but it’s rare.”

“Unless you’re a fire mage.” Fiame’s words were bitter as she clenched one hand into a fist.

Azara grimaced. She couldn’t deny it, not when her entire village had been taken out. Even being in the heart of Pocale hadn’t saved any of them. No one had escaped. No one except her, and in her own way, Azara hadn’t escaped anything. She’d heard enough from the two people from her village she’d found to know what her fate could have been.

“But no one will know you’re a fire mage. After all, what fire mage needs to carry a tinderbox?”

That got another ghost of a smile out of Fiame. She glanced up at the sun, hanging directly over them, and down to her son. Only then did she look back at Azara. “Be safe, and know neither of us will ever forget you.”

“I won’t forget you. I wish you every bit of luck for your future.” And she meant it. Azara always hoped that the people she freed, especially the children, could have the kind of life she’d lost when the slavers had attacked. It was nice to think there could be children of fire mages living ordinary lives.

She lifted a hand as Fiame and the boy walked off, watching them trudge away. Azara lowered her hand and decided that was enough being sentimental. She still hadn’t found her family, hadn’t heard a rumour about them, and until she was able to save them, she couldn’t stop searching. She’d been a girl when they’d been taken. But things were different. She’d had over a decade to get stronger, and now she could protect what she wanted to protect. No one would take people from her again.

Hiking her pack higher, Azara turned away from the road to Pocale and towards the one that snaked its way to the Empire.

Be the first to review “Heart of Crystal by Lauren D.M. Smith” Cancel reply