You are here: Products Heap of Trouble by Natalie Acres 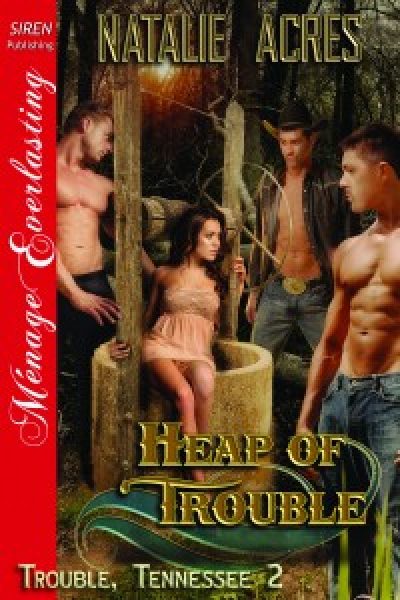 Heap of Trouble by Natalie Acres

One wrong turn in life lands Heather Powers in the heart of danger. Recognizing an opportunity to break free of captivity, she sends out an urgent cry for help. Soon, Trouble’s founding fathers are gathering round in hopes of saving one of their own, but the clock is ticking as they sneak up on Heather’s captors in a creepy forest.

Attempting to pull Heather out of a bad situation, Curt Caldwell, Justin Dare, and Gabe Reynolds uncover an evil family with a deadly agenda. Desperate to save an innocent victim, Trouble’s men march straight into the heart of spine-chilling danger. Soon, they’re forced to face off with the occult and a haunting wickedness far more sinister than anyone could ever imagine. The stakes are high as these men risk everything for love, including the very safe haven they affectionately call their home.

This particular installment materialized after researching occult practices and secret societies for an occult fiction project. Already working on the Trouble, Tennessee books, I was able to use a lot of what I learned to enhance Markie’s story. A secondary character, Markie ended up with a great subplot and it all unfolded during the research mentioned above.

A few minutes later, the cracking and popping of twigs under boots filled the area. About halfway up a steep incline, Harley apparently decided it was time to brave the task of asking the difficult questions. “How long have you known Heather?”
Gabe sniffed, trying to ward off a smile. It was hard to think about the first time they’d met without grinning. “A little over four years.”
“Did you guys date or—”
“Definitely an or,” Gabe replied, stepping over a log and searching the hillside for any sign of movement. “We never really had an opportunity to start anything. Her parents and brother made sure of that.”
“I’m surprised you and Bradley are on speaking terms then.”
“It’s a long story.”
“What happened?”
“It’s what didn’t happen that haunts me.”
“Then what didn’t happen?” Harley stopped walking and shot him a grin. “We have a hike ahead of us. Might as well tell me a daytime story.”
“Okay.” Gabe laughed. “Once upon a time, there was a vixen modeling a bikini and stilettos at a local fashion show…” He deliberately let his voice trail. “She was seventeen.”
“And?”
“And she was seventeen. I found out before anything happened between us, and that’s it. The end.”
Harley stuck his finger in the air. “So wait a minute. Let me get this straight. You’re carrying a torch for a gal—a young woman who is Bradley’s sister I might add—and you’ve never so much as kissed her?”
“That’s right,” Gabe said, ducking under a low branch and traipsing ahead.
“That’s just fuckin’ wrong, man.” Harley caught up to him.
“What’s wrong about it?”
“She was like a daydream. You never had her?”
“No, Harley. Never.”
“And you’ve been hung up on her for the last four years?”
“Yep.” Gabe realized how lame he sounded. “Might as well say it. Everyone else has. I’ve spent my prime waiting on a woman.”
“I don’t get it.”
“You wouldn’t,” Gabe said, grinning. “You’re the man who shares a woman with a whole team of players.”
“Now that’s definitely wrong,” Harley said.
“And true.”
Harley laughed. “Don’t knock it, man. You’ll see. It’s not a bad situation for the guys on the team.”
“I’ll bet.”
“I know.” He looked all lovesick then and pulled out his phone. After looking through pictures, all of them decent from what Gabe could tell, he returned his cell to his pocket.
“Got it bad for her, do you?”
“Yes I do,” Harley admitted.
“And how’s sharing work out for you?”
“Ah so you’re curious. Must mean you already know what the future holds.”
“The only thing my future holds is Heather. Now if that comes as a package deal, I’ll peek inside the box and take a look then, but I’m hoping it doesn’t.”
“Based on what I know?” Harley paused. “It might.”
“Do you know something I don’t?” Gabe asked.
“You know, or at least suspect. You just don’t want to believe it’s true.”
“Justin and Curt.”
“Yep,” Harley replied, taking longer strides as the terrain shifted and seemed more uneven.
“Hang on.” Gabe threw his arm sideways and stopped Harley. “How long have we been out here?”
Harley shrugged. “Fifteen, twenty minutes since we pulled on Vance land.”
“And we haven’t encountered the first bit of opposition?” Gabe searched the land to his left and right. In the distance, he spotted Allister and Draegan, wearing their ridiculous hunting camouflage. He shifted his gaze to Harley, also dressed in camo. “I meant to ask. What’s up with your taste in fashion?”
“Blending in?”
“Planning to pass yourselves off as hunters, are you?”
“If we’re stopped, it’s worth a try.”
“I guess,” Gabe muttered, still bothered by the calm. “Locals around here claim this is the devil’s playground. Don’t you think it’s strange that we’re not hearing or seeing anything?”
“Shit. I forgot to tell you. Satan naps from two to four.”
“I’m serious here, Harley.”
“Me too.” Harley passed him again.
A loud boom resounded in the distance. Gabe grabbed his arm once more. “Hold up.”
“What is it?”
“Did you hear that?”
“Yeah, and it’s behind us.”
“Maybe,” Gabe said, narrowing his eyes on the property in front of them. “Even if those shots were back there, straight ahead isn’t exactly sacred ground.”
“Given the rumors surrounding this place, I wouldn’t be so sure.”
Gabe looked off to the left. Below them, he expected to see Allister and Draegan again. They were gone.
“Call Draegan and Allister.”
Clearly alarmed, Harley fished his phone from his pocket and dialed. “You okay? Gabe was concerned about you. Yeah I know. He’s such a sweetheart.” A beat later, he added, “All right, man. Stay alert.”
“Well?”
“We’re bringing up the rear,” Harley said.
Every muscle in Gabe’s body tightened and he stopped again. “They know we’re here.”
Harley blew out a hard breath. “Now what?”
“It’s my gut.”
“If you don’t mind, I’ll keep walking and you keep tapping on your sixth sense’s shoulder. Let me know when she gives you something substantial to go on.”
Harley took the lead then by several paces. Gabe kept his distance, watching Harley’s back.
“You never told me what happened in the sequel.”
“What sequel?”
“Your fairy tale was fairly short. What happens in the second book?”
“I get the girl and we live happily ever after.”
Ba-boom! Ba-boom! Ba-boom!
“Holy shit!” Harley ducked.
Gabe was surprised Harley didn’t drop and roll. An explosion rocked the earth and a shot of dark smoke darted above the trees as if it had been blown there on purpose.
“Well, Gabe, here it is, man. That fucked-up climatic turning point of the story where everything goes to hell.”