You are here: Products He Had To Show His Girlfriend’s Mom How Big He Was by Kirstie Taylor 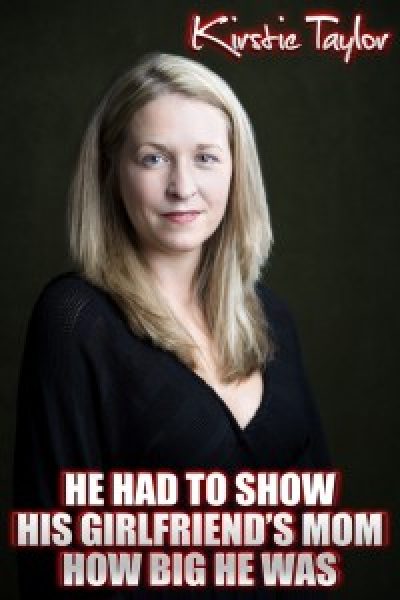 Dylan has to show how big he is to his girlfriend’s mom who is concerned that it may be too big for her precious daughter.

Dylan went round to see his girlfriend but she wasn’t in. Her mom answered the door. Turned out her daughter had gone out and would be out for another couple of hours. Mrs Green invited him in, said it would be a good idea for her to get to know him a bit better. Dylan had only been going out with her daughter for a few weeks and he’d never really got to know her parents.
So Mrs Green invited him in. She was on her own and said they could have a proper chat, get to know each other. She thought she’d talk about football to him, for she knew from what her daughter had told her that he was proper into his football.
“So what team do you support then?”
“United, Mrs Green.”
“Manchester United?”
“Yeah.”
“Oh that won’t please her father. He’s a blue. They won the League last year, didn’t they? City?”
“We won it this year, Mrs Green.”
“I know. Well I don’t. Well I do now because you just told me. But City won it last year though, didn’t they?”
“So? Big deal. The last time they won it the players were only being paid a tenner a week, that’s how long ago it was. We win it nearly every year. We won it this year, we won it in 2011, 2009, 2008, 2007…”
“Ok. Ok. You’re boring me now. I’m not interested in football. I only brought the subject up because Kayla told me you liked the game. I can’t stand it. Stupid game. Grown men kicking a ball about. They want to grow up. I only know City won it last year because my husband spent weeks banging on about it.”
“Yeah, well like I said, Mrs Green, it was the first time they’d won it for years. 1968 I think was the last time they won it.”
“You know your football, don’t you? I hope you don’t bore my daughter with it like you’re boring me.”
“You brought the subject up, Mrs Green.”
“Well let’s change the subject before I lose the will to live. Tell me what kind of music you’re into.”
“I’m into all sorts of music me, Mrs Green. The Smiths, Pink Floyd…”
“Do you not like Herman’s Hermits?”
“Who?”
“Herman’s Hermits.”
“Are they a new band?”
“You’ve never heard of Herman’s Hermits? I’m Into Something Good?”
“Sorry.”
“There’s A Kind Of Hush?”
“No. Sorry.”
“Mrs Brown, You’ve Got A Lovely Daughter?”
“Eh?”
“I’ll lend you one of my albums.”
“No you’re all right, Mrs Green. I’ll stick with my Smiths if that’s all right with you.”
“Seriously, you’ve never heard of Herman’s Hermits? Oh he was lovely that Peter Noone. I had his picture on my bedroom wall.”
“Was he the lead singer?”
“Yeah. Oh he was lovely.”
“How could he be in a group if he was a hermit?”
“Eh? Oh…yes…very funny. Kayla told me you had a sense of humour.”
They chatted away, and Mrs Green got to know him a bit better and then they’d only been talking for about ten or fifteen minutes when she said something that proper shocked him.
“So, how big’s your cock then?”