You are here: Products Haunted Souls by Kathryn Knight 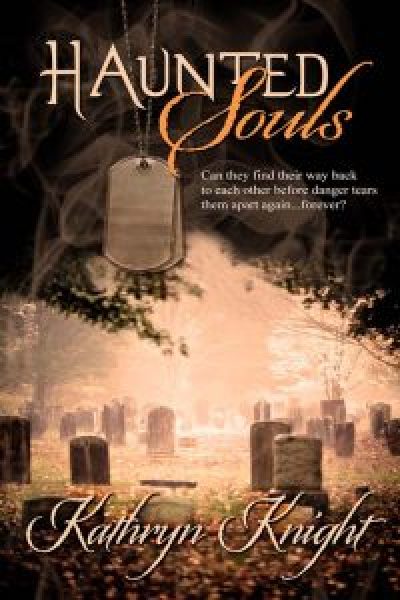 Kathryn Knight spends a great deal of time in her fictional world, where mundane chores don’t exist and daily life involves steamy romance, dangerous secrets, and spooky suspense. Kathryn writes contemporary romance spiked with mysterious hauntings as well as YA paranormal romance filled with forbidden love. Her novels are award-winning #1 Kindle bestsellers and RomCon Reader Rated picks. When she’s not reading or writing, Kathryn spends her time catching up on those mundane chores, driving kids around, and teaching fitness classes. She lives on beautiful Cape Cod with her husband, their two sons, and a number of rescued pets. Please visit her at www.kathrynknightbooks.blogspot.com.

Of course, there’s a romance piece to my novels as well, and it soon became clear to me the hero of my story had served overseas in the military for at least two tours. The end result combines steamy second chances with spooky suspense.

She closed the fridge, and suddenly Brett was standing right behind her. His hand closed around her wrist and he pulled her toward the office, the rough pads of his fingertips pressing into her skin.
He closed the door partially and led her into the middle of the room. Pain blazed in his eyes as he turned to her. “I need to apologize to you. I’m sorry I didn’t believe you. On some level, I didn’t want it to be true for selfish reasons. I don’t know how to protect you two from a ghost. Protecting people is my job, and all my training is useless right now.”
He was apologizing to her? After everything she’d done to him? The realization scraped her insides raw. “It’s okay, Brett. I get it. And we’ll figure this out, somehow. I just have to keep at it. There has to be more information out there—libraries, historical societies, maybe even some local history buffs. There are tons of cemeteries on Cape Cod. She could be in another town, or a little family plot. There has to be a record of her somewhere.” She tipped her head toward the computer. “I just have to search harder.”
His gaze followed her gesture, lingering on the desk. “This room brings back some memories.” He touched her upper arm, trailing his fingers downward in a slow, agonizing caress. Stepping closer, he moved his other hand to her hip.
What was happening? She struggled to catch up to this sudden shift of reality. Not only was he touching her again, he was referencing their sexual exploits—a previously forbidden topic, according to the unspoken rules.
Her pulse skittered as she gazed up at him, speechless.
He pulled her closer, his rock-hard erection pressing into her belly. “I want you. Every…single…second…of the day.”
Breathe. “It’s the same for me.” His mouth hovered above hers, taunting her with unbearable anticipation. She rose onto her toes, reaching for his neck, lifting herself up to him, until he captured her lips in a devastating kiss.