You are here: Products Hard Lessons by Jasmin Quinn 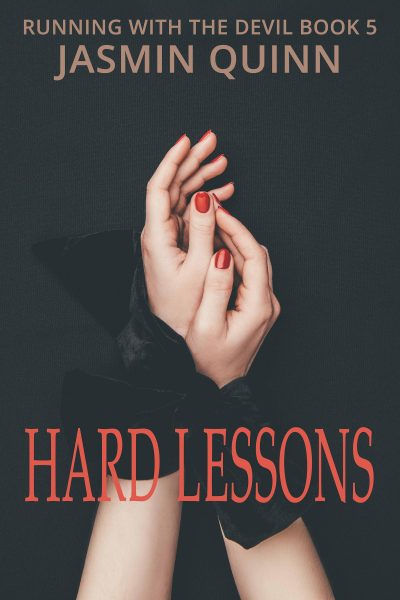 No sound, Mira. No crying, no sobbing, no screaming, no protesting, no moaning. No words. Not even a whimper.

Jack gets mad is what happens! He decides the pretty lawyer needs a few Hard Lessons of her own to bring her to heel.

While he’s schooling Mira on her true submissive nature, someone is chipping away at his criminal empire, murdering his men and interfering with his operations. Jack needs his brother out of jail and back in the game and he’ll do anything to make it happen, including exploiting Mira’s vulnerabilities.

Hard Lessons is Book 5 of the Running with the Devil Series.

Jasmin Quinn is a writer in her heart and soul, and loves to read and write stories with strong male and female characters. She writes intense and sexy romance with a hint of suspense, a splash of intrigue and a whole lot of Alpha male. She'll read almost any genre of fiction but is drawn mostly to romance.

When Jasmin isn't writing, she's a beta reader and editor for her author-buddies. She also likes to fuss with her website, lunch with her friends, indulge in retail therapy, and play the occasional computer game. She stays in shape by exercising her rights to her opinion.

She lives in British Columbia, Canada with her husband.

I've always been a writer, always wanted to be one. This is one in a series of books I've written and my favourite. Jack Creed, the H in Hard Lessons, is introduced as a villain in a previous book I wrote, Black Surrender, and there was just so much more of his story to tell.

They were alone, Jack standing in front of the massive oak desk, leaning on the edge of it. Mira in front of him, trembling, her legs threatening to give out, her stomach knotted, her heart thudding. She crossed her arms over her chest, hugging herself tightly as he stood up and circled her slowly, like a lion stalking its next meal.

“I’ve waited to have you up close for quite a while now. Watching you in the courtroom.” He paused as he drew a finger to her face and traced the curve of her cheek. “Makes me forget I’m a gentleman.” Mira almost retorted but her words died on her lips as he leaned towards her, inhaling her. “You smell like a kitten.”

His eyes flitted over her, raking her from her feet to her skirt to her chest to her face. “Drop your arms, hands at your sides.”

Mira didn’t move. She needed a plan, fast, a way to mediate this situation, but her mouth was too dry to speak, and her brain was churning in concert with her stomach. It wasn’t that she wanted to escalate the situation, she just couldn’t make herself comply. Her brain wouldn’t let her. He gave her a minute and when she still didn’t drop her arms, he gently took her hands in his, unlocking them from her elbows and drawing them down to her sides.

“Are you afraid?” he asked softly, his hands caressing her forearms.

“That’s good, Mira.” He said her name as if making love to it, rolling it across his tongue, letting it fall from his lips. “You should be afraid. I want you to clearly understand why you’re my guest this weekend. On Monday morning, I will think about letting you go home. If you’re well-behaved.” He gripped Mira’s chin with his hand, pulling her head up so that she had no choice but to look into his eyes. “Will you behave?”

“I don’t know what you want from me,” Mira said tearfully. He was being so gentle, so careful, but she knew this was a game for him. She didn’t understand the rules, maybe he didn’t want her to.

“I see.” Jack replied dropping his hand from her chin, letting it glide over the curve of her breast and then resting it on her waist. “So you can’t promise me you’ll behave until you know what I want. That’s very practical of you.” He smiled at her as she shrank under his touch, a small smirk, then said. “What I want first is to take that skirt off you.” He circled her waist lazily with both hands, bringing them to the small of her back, fumbling at the button on her skirt, opening it, then sliding the zipper down.

Mira’s heart beat wildly and she could barely breath. “Jack, please don’t do this.”

“Shhh,” he said softly, pulling the skirt down over Mira’s hips and then letting go of it, watching as it fell to the floor and pooled at her feet. “Step out of it,” Jack ordered.

Frozen, confused, Mira hesitated and it cost her. Jack narrowed his eyes and frowned, then reached his hand up drawing his fingers through her hair and pulling her head towards his face. He leaned in and talked menacingly into her ear. “Mira, you cost me my brother and I’m not happy with you about that. Your current situation is tenuous. Over the course of this weekend, I’ll do whatever I want with you, including tying you up, fucking you however I want, treating you like trash. And that’s what will happen if you behave yourself. If you don’t behave yourself, after I am done with you…” he shrugged. “Who knows.” He tugged her hair gently. “But you’ll be good to me, won’t you Mira?”

Mira had been holding her breath as he spoke and barely registered the question. She nodded fleetingly, and he pulled her hair a little harder, “Nodding’s not good enough.”

“Yes.” Her voice shook as she gasped out the single word.

“Good girl. Now step out of the skirt.”

Mira complied, shifting closer to the hand that was holding her hair, easing the tension. He glanced down at the skirt, then reached out with his foot and kicked it out of the way. Then back to her eyes as he dropped his hands to the buttons on her white, collared blouse.

“I don’t like these shirts on women,” he murmured as he undid the top button. “Little girls trying to be like the boys. It’s not sexy.” He undid the next button, then moved the shirt aside to look down to her chest. Then back to her eyes, assessing her. She tried to, but couldn’t hold his gaze, he was too dark, too dominant, she dropped her eyes to his chest. He chuckled as he continued undoing the buttons until there were no more. As he slid her shirt open, his eyes feasted on her body, his hands roaming over her from her shoulders to her breasts to her waist, coming to rest on her hips. His heat seared into her through his palms, branding her. And she stood there, letting him do all of it, trying to breathe.