You are here: Products Hard Focus by Vic Tyler 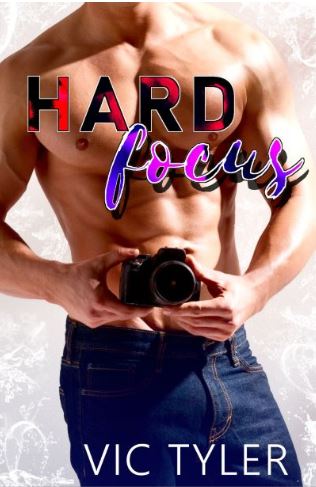 “There’s a reason they call him NYC’s Devil Photographer.”

The Devil truly is beautiful.
And I melt under his tantalizing gaze.
Literally.
I made a hot mess on his bed for my first day of work.

But he took his sweet revenge.

Breaking me in, claiming my body, unraveling my heart.

I’m running from my past. He’s afraid to face his.
We can’t afford to trust each other.
This was supposed to be fun.
But what’s fun about falling in love?

When Vic Tyler isn't wrestling her doggo or reading and writing, she's destroying the kitchen with her crazy cravings, bundled in a cocoon of blankets, or vrooming and zooming off to see the world.

She loves to learn new things and talk to lots of people, so feel free to reach out and say hi!

I was going through a quarter-life crisis when I dropped everything to go soul-searching. I wanted to write about emotional, passionate relationships that develop gradually and organically.

Allegro agitato. Fortissimo. Accented chords.
My body remembered.
The horse hairs on my bow frayed as I sliced through the angry rumbling of my strings. The deep reverberation of my cello’s wooden body trembled between my knees, shaking me down to my bones. Dies irae playing to the accelerating tempo of my heartbeat.
There was a reason this man was notorious. An irrational force, a self-contained bomb. He inspired geysers to spew and volcanoes to erupt. He would croon to the restless animosity in the Pandora’s box, hidden deep in your soul, to coup d’etat your ass.
Asshole Supreme. The Devil Photographer.
And yet I was desperate for a sliver of his generosity. Maybe ‘generosity’ is too strong of a word for him. I would settle for charity and take what I can get. Here I was, in front of a man who would rather burn his ship than drown with it, offering him the match.
When Brie asked me last night if I could fill in as a photography assistant for a friend, I said sure, why not?
Even though I meant definitely. Yes. Hellz to the yeah. Hallelujah, praise the lord, please let me be able to pay my rent this month.
I’d gotten to the point where I was thinking about finding a sugar daddy to survive. With all the bills, student loan reminders, and the practice eviction notices my petty landlord slipped into my mailbox, my life was a mess.
Sigh.
It’d be nice if I got a piece of mail that didn’t have a dollar sign on it somewhere.
“Benji’s a pretty difficult photographer to work with behind the camera,” Brie said, blowing onto her freshly painted toenails.
(It was The Underestimation of the decade, I’d realize 12 hours later.)
“Which is why two of his assistants quit before the shoot even started.” She scowled. “Such a diva.”
With long golden hair that Rumpelstiltskin would covet, a visage worthy of Aphrodite’s spite, and legs that stretched for days, Brie Hill was too perfect for her own good. She was determined, self-made, and charming, which made her debut into the modeling industry a smooth cruise.
“How hasn’t he been blacklisted already?” I shoved a handful of popcorn in my mouth, watching the one and only, young and fiiine Heath Ledger singing and dancing around in “10 Things I Hate About You.” I’d eat that baritone vibrato. Yum.
“He’s not awful to work with,” Brie said, absentmindedly fiddling with her necklace — a gold shell with an inlaid pearl. She never took it off except for work. “Unless you’re assisting. Benji doesn’t want any assistants, and he makes sure that none of them stick around. Totally Type A. But people let him do it ‘cause he’s that good. They’re already calling him a once-in-a-lifetime visionary.”
This dude already sounded like a pain in the ass. But Grant — Brie’s childhood friend and photographer-man’s investor — seemed pretty desperate. And for Grant, desperate was a rare occurrence. So Brie begrudgingly said she’d ask me.
I started working as a photography assistant a year ago. Brie knew a couple of small studios that mostly did family portraits and smaller assignments. But that didn’t bring in much money, since the studios didn’t have enough work for me to work full-time.
“I’ll kind of, sort of vouch for him,” Brie said, scrunching her nose and sighing. “He really does have some crazy ideas that get your adrenaline pumping, and the prints are top-notch. My agency is trying to book him all the time.”
Apparently she and Benji helped each other early on in both their careers when they worked TFP — a model and a photographer exchanging Time For Prints as currency.
“It’ll be great experience, but don’t say I didn’t warn you.” Brie wiggled her shiny flamingo pink toes.
“Alright,” I said, shrugging. I was used to divas, and this one would be paying me to deal with his shit. “How bad can it be?”