You are here: Products Handsome Bastard by Kate Hill 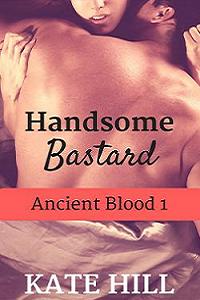 Trained since childhood to hunt blood drinkers, Leotine is sent on a mission to destroy the elusive Cyprian Augustus. The cunning blood drinker has converted or killed many hunters who have tracked him. Will the vampire or the huntress win their deadly game of lust?

Note: Handsome Bastard was previously published. This is a re-edited version and contains two additional scenes.

Kate Hill is a vegetarian New Englander who likes heroes with a touch of something wicked and wild. When she's not working on her books, Kate enjoys reading, working out, and watching horror movies.

This book is part of my previously published Ancient Blood series. I'm happy to have the chance to release this re-edited and expanded version of Handsome Bastard.

Leotine’s heart pounded as she stared at Cyprian Augustus, so enraptured by his catlike green eyes and voice as deep and rich as the finest wine that she nearly forgot she’d been sent to kill him.

It had been her idea to come to him under this guise. As with all her assignments, she had carefully studied her victim. Though Cyprian had at first seemed to harbor no weaknesses, Leotine had eventually found one. Women. Plump, innocent-looking women in particular. Fortunately, Leotine possessed both attributes.

Not to say that Cyprian was a fool for such women. The man hadn’t a foolish bone in his body. He simply lusted after them. Lust could lead to love. Love to trust and trust to death. Convince him of her love and loyalty and he would be hers.

The first step was to seem as vulnerable as possible. What better way than to appear as a beaten woman on the side of the road? Julius had agreed to her plan and assisted her in the preparations–far too willingly for Leotine’s taste. The filthy swine had actually seemed to enjoy beating her. He had taken her by surprise with his ferocity. Furious, she’d struck back only to be knocked unconscious by one of his slaves.

For the first time, she began to wonder whether her duty was worth the sacrifices she made.

Cyprian placed a hand to her cheek and washed blood from her face. She tried to turn away, but he held her gently yet firmly as he blotted her lips.

“At the moment you’re my guest,” he said in those low yet incredibly masculine tones that sent an unfamiliar feeling of warmth through her entire body.