You are here: Products Hammer of the Gods by B. D. MacCallum 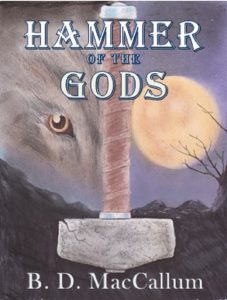 Hammer of the Gods by B. D. MacCallum

Growing up in a remote region of the Ural Mountains in Romania, Sorina Lazarovici has heard a thousand stories of vampires, werewolves, demons and monsters. The rest may be nothing more than silly superstition, but she knows for a fact that monsters are real. She should know; the cursed thing has been hunting her family to near extinction for generations. Once it has finished her off, it will have succeeded.

She soon finds herself relying on someone that is nothing more than a thief and a murderer to save her. He may be the last person on Earth she wants help from, but she is drowning in a sea of despair. When you’re drowning, you’ll grasp onto any hand that offers assistance, even if you believe your throat will be alter being pulled from the water.

Some consider him a thief and a murderer, some the greatest friend anyone could ever have. Despite his name, Thor Odinsson is not a God. A God would have more answers than questions. He is not a hero. A hero is someone to be emulated: something he could never be. He’s just a man struggling to make sense of his senseless situation. Everyone keeps telling him who and what he is. He keeps telling himself that the thousand-year-old curse placed upon his family isn’t real, but it appears he may be wrong.

I live a pretty active lifestyle: hiking, biking, weight training, climbing and rappelling. For as active as I am, I run only when being chased or attempting to play soccer.

The song: Loverboy by Billy Ocean. A lot of people have asked me: Really? The usual responses have been “Huh?” or “You’re kidding?!” when I tell them yes. It’s absolutely true! Thank you for being a wonderful singer, Billy! I listen to music most of my day, and I can never sit still during one of your songs!

Thor Odinsson lifted himself onto one elbow, amazed at the effort the simple gesture required. He felt as if he had run a succession of back-to-back marathons against an elite athlete determined to run him into the ground. The competition – And it was a competition, fierce and grueling as any ever recorded. – ended in a tie; both contestants conceding defeat and claiming victory at the same instant.
The sheet beneath him was sweat-soaked and only half covering the mattress, the pillows nowhere in sight. His breathing was quick gulps, but slower and steadier than a few moments ago. Somewhat slower, at least. His heart pounded in his ears like frantic drumbeats, and it took several seconds for his eyes to focus on the figure standing at the open window.
Her breath was no steadier than his; she braced herself against the sill, the muscles of her arms tense form the effort to stay on her feet. The glow of the streetlights below shimmered on her sheen-covered skin, highlighting every line of her toned physique as she trembled uncontrollably. Thor smiled to himself. This was a long time coming.
Thor met Lynn Beck his first day at Harvard what seemed a lifetime ago, the toned blonde beauty instantly becoming the object of his lust. Truth be told, she was the object of a lot of young men’s lust at the time, and fully enjoyed the attention, but her eyes had always been on the older graduate-students her own age. There was little wonder she basically ignored the sixteen-year-old boy following her around like a lost puppy. He tried anyway, and eventually got her… even if it did take six years to ware her down.
He watched as lines of sweat trickled down her back to her perfect ass, down her shapely legs to pool at her feet. A reflection of her firm, well rounded breasts shimmered in the window glass, still heaving as she tried to catch her breath. He could not help feeling a sense of pride for that. Lynn ran ten miles a day, and he was the reason she was breathing like an asthmatic in the Mekong Delta during monsoon season.

Be the first to review “Hammer of the Gods by B. D. MacCallum” Cancel reply