You are here: Products Half-Blood Descendant by Natasha Brown 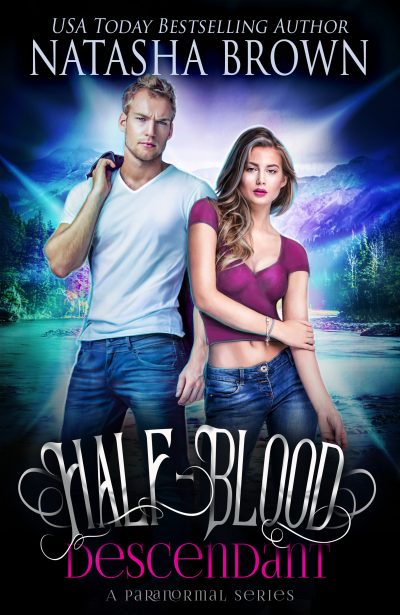 Jax never stays anywhere long enough to put down roots. He’s a shapeshifter—the only one of his kind, or so he thinks. While prowling on his landlady’s property, he is stunned to find a man feeding on her neck. Although he frightens away the blood-sucker, Jax leaves behind a paralyzed woman and a trail of blood in his wake.

Aerilyn teaches high school and doubles as a guardian for the Genus Society, an ancient underground shifter organization. After learning of a cougar attack in her own mountain neighborhood, she suspects a rogue shifter is to blame.

When the Society accuses Jax of the “animal attack,” he is ordered to stick around until he can clear his name. Desperate to regain his freedom, he must put his trust in his beautiful guardian. Their forbidden attraction leads Aerilyn to wonder if the blue-eyed drifter is innocent. And if he is, the Society has an even bigger problem on its hands—one that feeds on blood.

USA Today bestselling author Natasha Brown's imagination has always been a distraction. The books she read in the dark past bedtime fed her excitement for fantasy worlds. Once she started writing, there was no stopping her. By day, Natasha’s an assistant teacher at an elementary school, and by night she’s a book cover designer. Her weekends are spent writing and spending time with family.

I love imagining beings hiding in plain sight, so the Half-Bloods wasn't too much of a stretch for my imagination.

Jax stared in silence for only a moment before he sprang to action. He rushed forward a few steps and put his weight onto his haunches, prepared to spring. A deep growl erupted from his chest and poured from between his powerful jaws—a clear and direct warning any animal would respect. He hoped.
The man’s face lifted from KT’s neck, his mouth covered in her blood. His eyes flashed in surprise as he appeared to realize the danger he was in. He slowly rose to his feet, glancing longingly at the limp body on the floor, then focusing on the cougar inching toward him. The man lifted his lips to reveal bloodied teeth. He edged out of the garage and ran into the night.
Jax craned his neck, watching the man’s silhouette disappear before turning toward his landlady’s still body. He walked close enough to lower his pink nose to sniff her wounded neck. The metallic aroma of blood filled his nostrils. He stared at her chest, detecting the gentle rise and fall of her ribcage as she breathed.
Thank God, he thought in relief.
Her eyes stared unseeing at the ceiling. He wondered if she perceived anything that was happening. Despite being seventy years old, KT was the toughest woman he’d ever met, so there was reason to worry if she wasn’t swearing or throwing a wrench between his eyes. She lay still, as if in a coma.
Moisture saturated his forepaws, and he realized he was standing in her puddled blood. Jax backed away quickly, leaving a trail of bloody footprints. He needed to get to his phone to call an ambulance. She was alive at the moment, but he didn’t know how extensive her injuries were. He ran out of the garage and into the silent night.