You are here: Products Grind by Kait Gamble 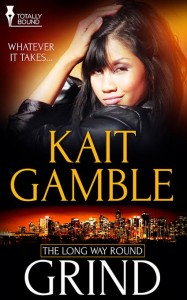 Can Jason convince Cara to go from being lovers to something more?

Commitment phobic Cara Witchai loves her life the way it is—especially her no-strings-attached relationship with long-time lover Jason. But when Jason blurts out a marriage proposal, it throws Cara into a tailspin. How can Jason convince her to stay?

Cara, a successful restauranteur, prefers to be in charge of her life. She’s done a great job of it so far. She has a wonderful friend, a restaurant where customers need reservations months in advance to get a table and she has a man who fits into her life without taking over. She can get on with her life while still having fantastic sex and not have to worry about maintaining a relationship that will eventually fall apart. It’s bliss, as far as she’s concerned.

Jason has other ideas for his latest visit to see Cara. They’ve dated in the past, but after breaking up, their arrangement has evolved into a mutually satisfying meet every few months. They understand each other and are happy in and out of bed. However, neither has pushed for anything more. Jason wants to take things further, so he must convince Cara that they make the perfect couple.

His plan—use every weapon in his arsenal. Money, his command over her body. Whatever it takes.

Kait was born and raised in the wilderness of the Pacific Northwest and started writing to entertain herself during the long winters as a child. Insatiably curious with a love of learning new things, she’s picked up many random skills including three languages and two martial arts. After travelling three continents (the other four are on her bucket list), she settled in England with her family where she spends most of her time cultivating her daughter’s love of reading and writing, scribbling ideas on every available scrap of paper, and trying out dialogue on her cat.

I wanted to write a story where a couple enjoyed a no strings relationship. But as I continued to write I found the hero wanting more. The funny thing was, the heroine didn’t. I thought the juxtaposition of roles was interesting and fun and that’s how Grind came about.

Pride. It was the first feeling Cara Witchai could describe in her chest every time she looked at her elegant, book-three–months-in-advance Thai fusion restaurant. Then it was happiness, fulfillment—and a little more pride.
After four years and too many sleepless nights picking every pattern carved into the polished teak that lined the walls and fine-tuning every item on the menu, the sounds of people dining and enjoying it now filled the restaurant. A complete success, if she was any judge.
Smiling, she turned to the reservations stacked on her screen when she heard the door open. A quick scan told her that there was nothing available, as she’d expected. She recited her well-practiced greeting easily before she even looked up. “Welcome to Dao. Unfortunately, we’re all booked up for the evening…”
“I guess I’ll just find a hotdog stand then.”
The voice immediately set her body humming as she met his electric gaze and megawatt smile. “Jason!”
A quick sidestep of the teak desk and he wrapped her in his strong arms. Inhaling his addictive scent mingled with whatever cologne he wore, she asked, “When did you get in?” She shifted back to look at him. Not that she needed to. She could remember every inch of him in great detail, right from the top of the jagged peaks of his dirty blond hair down to the brand of boxer briefs he preferred to wear under his tailored suits. That sexy groan he made whenever she ran her nails over the hard muscles of his back…
“Not long ago. Came straight over from the airport thinking I could enjoy something from the best restaurant in town, but it looks like everyone else had the same idea.” He scanned the bustling room with sky-blue eyes before returning his gaze to her. He let his hand drift down her arm to capture hers. “Congratulations.”
Cara squeezed his fingers. “I didn’t do it alone. If you hadn’t helped me out in the beginning, I’d never have made it this far.”
Jason leaned in to peck her on the cheek, before whispering, “Are you kidding me? This is all you.”
Heat climbed into her face and settled in her cheeks. It was hard to tramp down the impulse to drag him into her office and tear the suit off that amazing body. Unfortunately, the heat fizzled a bit when she saw the golden head of her best friend and hostess appear at the door leading to the kitchen. Though she did nothing to disturb the diners, Cara could tell something was up from the pinched expression on her friend’s face.
Cara gave Jason an apologetic smile. “Duty calls. Go ahead and relax in my office. I’ll have Chelsea bring you something.”
He kissed her again, this time brushing his lips over hers. “No rush.” With a wink, he sauntered off toward the back of the building.
A woman at a nearby table caught Cara’s eye and smirked suggestively as she saluted Cara with her wine.
Cara’s lips curved as she thought of the wicked things he could do that would warrant such a look. “Oh, you have no idea.” With an anticipatory little shiver and a sigh, she headed for the kitchen to see what was going on.
The scene waiting for her in the gleaming white kitchen wasn’t unusual, just something she could do without and had to deal with too often.
Her tall head chef stalked the kitchen, growling at his sous chef, Marco, while the wait staff and the rest of the kitchen staff watched on helplessly.
Cara nudged her friend. “What’s going on, Chelsea?” All she could make out were the words ‘too much’, ‘imbecile’ and ‘overcooked’. The rest was a wild blend of Italian and English that was pretty much incomprehensible.
Chelsea rolled her big green eyes. “Daniel is freaking out about his talent being wasted or something.”
“What did Marco do this time?” The countless arguments rattled through her head. Could there be anything new to argue about?
“What makes you think it was Marco?”
Cara snorted at Chelsea’s attempt at levity. “It’s always Marco.” Cara eased her way past the small crowd gathered around the two men. Daniel and his sous chef had a complicated relationship that reminded Cara of a lion waiting for a sign of weakness from the alpha so that he could depose of him. Currently the cub and the alpha were circling each other as if they were going to end it right there.
They were the complete opposite of the relationship she had with Chelsea. They had known each other since the second year of university and had been close friends from the moment they’d discovered their shared love of food and science fiction. They had grown apart over the last few years. But, after a disastrous relationship blow-up, she moved back and Cara hired her as a hostess to help out.

Be the first to review “Grind by Kait Gamble” Cancel reply