You are here: Products Graced With Age by Elizabeth Nguyen 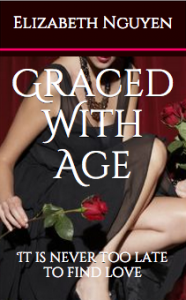 Graced With Age by Elizabeth Nguyen

Jeannine Dubois is a middle aged elementary school teacher that has long evaded marriage, for she can never find a man that is suitable for her. That all changes when a young successful businessman and model stumbles into her life, who she used to teach twenty years ago.

Elizabeth currently resides in Los Angeles pursuing her career as both a performing artist and storyteller. “Graced With Age” is her first published story.

I work as a school teacher and I was talking to my boyfriend about their futures and what they could turn out to be as adults. He joked that what if one of them turned out to be a model. That’s when I joked back and told him are you jealous? Out of nowhere this story wouldn’t leave me alone and I just had to write about it.

The following Monday Jeannine was in her class writing down the agenda for the day on the board. It was a new day and the date with her and Dante was already well past her.
She sat in her chair waiting for her little younglings to flood in, correcting homework she never got a chance to go over. Students were slowly coming into the class one by one. When the morning bell rang the students were all seated.
Two students were running in, bumping into each other, as they hung their bags on the row of hangers with the rest and ran to their desks.
Jeannine stood up from her chair and smiled. “How was everyone’s weekend?”
“It was awesome Miss Dubois!” one student said.
The children were all eager to share their weekend experiences.
“Hold on, hold on, one at a time. Jesse?” She pointed to her favorite student, a shy little boy who did all his homework, but found it hard to interact with other students in class. She had a soft spot for him.
Jesse hesitated to speak when called upon. “Well,” he said looking down while fiddling with his fingers. “My brother took me to Chuck e’ Cheese, and we spent the entire day there.” He was hiding a smile. “We won lots of prizes together.”
“Your brother is very sweet. Is that all Jesse?”
He nodded his head.
“Any others?”
She spent the next ten minutes listening to the children sharing their exciting weekend experiences with the class.
“Okay, moving on. Did everyone get their report cards signed?” The second graders all groaned in unison. “Pass them all up to the person in front of you. Those that didn’t get it signed are going to get detention.”
Jesse stood up with his report card and brought it to Jeannine.
“I didn’t get my parents to sign it…”
“Oh?” What a shock. Jesse was always on top of his assignments. She grabbed it from his hand.
“Whose signature is this then?”
“My brother’s.”
She contemplated for a bit. “Jesse you remember what I told the rest of the class at the beginning of the year? Only your parents can sign off on your report cards.”
“I know…can you talk to him about it? He picks me up after school. I don’t want to get in trouble.”
“You’re not in trouble Jesse. I’ll talk to him.”
The rest of the day went well. She taught them how to spell the months of the year. Seeing her children grow and learn was one of the most self-fulfilling feelings that filled the void of being single.
After school Jeannine was outside watching students getting picked up by their parents. She was with Jesse.
“What does your brother drive?”
“It’s a shiny grey car.”
There were only a couple of kids left waiting to be picked up.
“There he is!” Jesse said spirited. He pointed to a silver Audi. It gleamed so magnificently and the vehicles surrounding it looked like it didn’t belong on the same pavement it drove on.
“Is that your parents’ car?”
“He bought it.”
Jesse was waving to his brother and gave him the come here motion. The Audi had to turn around towards the parking lot, fighting against the herd of minivans that crowded the streets.
Jeannine studied the car as it parked, wondering who was going to come out of that silver car.
A tall handsome man got out of the car. He was wearing slacks with a formal button up tucked in with black dress shoes. He had wavy brown hair and very masculine facial features. It was like he popped out of a magazine cover.
Her heart thumped as he approached her and Jesse.
He bent down to embrace Jesse with open arms. “How was school?”
“It was good.”
He stood up and went up to Jeannine. He smiled at her, and she almost forgot how to breathe.
“I’m Jesse’s homeroom teacher—”
“Miss Dubois,” the handsome man cut in.
Jeannine’s chest tingled. She smiled at him. “Yes, that is my name.”
“You don’t remember me do you?”
He knows me? She dug into her brain, trying to remember a time where they met. Who was he? The talent show was just a month ago, and Jesse put on a cute little performance reciting jokes to the crowd. Perhaps he was there and they met briefly. She would have remembered meeting someone as tall and handsome as him though.
And then it hit her.
“Nicoli Baril? Goodness…” She couldn’t believe it. Nicoli Baril, a former student of hers two decades ago. She knew that Jesse’s last name was familiar, and they both did bear some resemblance. Jesse was bigger on the ears and had a rounder head, though everything else, their cheeks and eyes, were similar.
Nicoli as a kid was obedient and a little awkward around the other kids, just like his brother. On her birthday young Nicoli gave her a rose and kissed her on the hand. She remembered looking down at him and thinking he was the sweetest boy ever.
Now he was looking down to her.
He grabbed her hand and kissed it.
“Nicoli,” she said embarrassed, whispering to him. “What are you doing?”
He got up and looked her in the eyes. “You haven’t changed.”
“Well Nicoli,” she said trying to regain her composure. “It’s nice to see you’re doing very well for yourself. I wanted to talk to you in regards to your brother and parent signatures.” She was stumbling on her own words.