You are here: Products Gotta Have Faith: A Seven Virtues Ranch Romance Book 1 by Becky Doughty 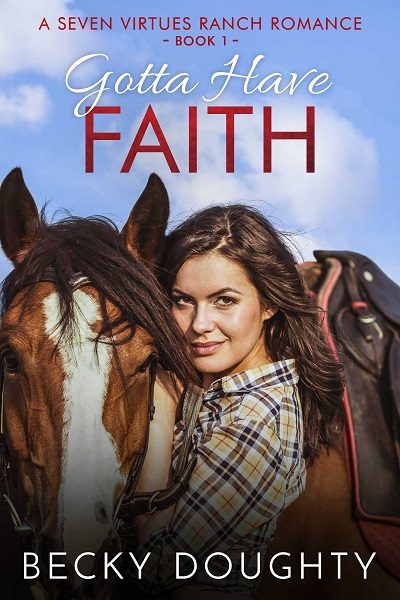 A secret baby. A second chance at love. Can a small town cowgirl and a big-time city boy find their happily ever after?

Faith Goodacre has worked her jeans-clad fanny off to make sure her little world is operating exactly the way she wants it. Seven Virtues Ranch is prospering, Daddy is finally back on his feet after his terrible tractor accident, and her daughter, Jasmine, is growing up just fine without the father she’s never met. So when Faith’s high school sweetheart, Cordell Overman, shows up out of the blue to win back her heart – oh, and he’s bought the ranch next door – Faith’s well-ordered world suddenly spins out of her control.

Cord is stunned when he comes face to face with the daughter he didn’t know he had. But there’s no denying those Overman eyes and the cleft in her chin that perfectly matches his own. Now he’s got two women to woo, a rundown ranch to bring back to life, and a whole town to convince that this time around, he’s here to stay. He’s not the starry-eyed kid who left Plumwood Hollow all those years ago, no sir. He’s ready to be the hero of his lady’s heart, the champion of his daughter’s world, and the rancher he’s always wanted to be.

What was it his grandfather liked to say? Oh yeah. Man makes plans, and God laughs. But Cordell Overman is determined to have the last laugh himself, and he’s simply gotta have Faith to make his dreams come true.

Becky Doughty is the author of the award-winning Elderberry Croftseries and the voice behind an ever-growing library of audiobooks. Her novelsare imbued with romance, friendship, humor, and lots of family drama. Andusually a dog or two. "I write fiction, mainly because nonfiction is hard!Yes, I've tried. Let's just say I like to color outside the lines when it comesto sticking to facts. However, if you're looking for a book you don't have toshove under the couch cushion when visitors stop by, you've come to the rightplace!" Becky writes Heartfelt Contemporary Romance and Women's Fiction.

Becky is married to her champion of more than 30 years. They have three ratherpulchritudinous children, and they all live within a few miles of each other inSouthern California. They share their lives with too many animals, a riotous,rambling kitchen garden, and a strange underground concrete room they'recertain was built for dark and sinister purposes…

We have lived in Southern California for our married lives, but this year, we moved to the Midwest, back to where my husband was born and raised – horse and cow country, agriculture paradise, large families and small towns. This series was inspired by the completely different mindset we've encountered in this new place we call home.

“Nothin’ finer than a hardworking woman in a worn pair of jeans and a Stetson.”

Faith Goodacre straightened and turned slowly. She’d know that voice anywhere. She removed her safety glasses, wishing she’d worn her shades instead, and narrowed her eyes against the brilliant sunlight. It was uncommonly warm for early May, but the weather could still change on a dime this time of year. She settled her hat a little firmer on her head, then lifted her chin a notch so she could look down her nose at the man who’d just rounded the end of the barn to park across the gravel driveway behind her. Hooking her thumbs in the belt loops on her jeans, she watched as Cordell Overman took his sweet time getting out of his big Cajun Red Silverado, grinning at her all the while. He stopped several feet away from her, thank the good Lord above, because even if she could get her feet to move, she wasn’t about to retreat. He was on her turf, and she hadn’t yet decided if that was a good thing or not.

She widened her stance and squared her shoulders. “Sure beats a city slicker with soft hands and a sunburnt scalp, kicking up dust in a shiny new truck, to boot,” she said, letting her sweet tea drawl lace the words with just enough sugar to take the edge off.

“Ouch!” Cord clutched his chest and staggered backward a step or two. But he kept his eyes fixed on her face, and his smile didn’t waver, making it somewhat difficult for her to maintain her disdainful expression.

Not that she was looking.

Okay, yeah, she was.

“You’re looking good, Cord.” Dang it. She hadn’t meant to say it out loud, but at least she sounded unaffected by his sudden appearance.

“Even with this sizable hole you just blasted through me?” He lifted his hand and peered down as though to gauge the extent of the damage, then looked back up at her again, his eyes sparkling with humor.

He held his arms out at his sides, making his already snug gray t-shirt stretch even tighter across his chest. “Then how about a welcome back to the holler hug for an old friend?”

She forced her gaze to stay on his face, but looking into his November sky eyes was proving to be just as troublesome as ogling his impressive physique.

Old friend. So that’s what they were calling it these days? “Believe me; you don’t want a hug from me.”

“Sure I do.” He took a step toward her, but she held up a hand to stay him.

“As you so eloquently put it, I’m working. Hard.” She tapped a finger against the shield of the chop saw she’d been using, then lowered the blade and knocked the safety into place. “I’m not exactly in the mood to cuddle right now.” With the back of her wrist, she swiped at a drop of perspiration that trickled down the side of her face and clung to her jawline. She was sweating like a sinner in church, covered in sawdust, and her hair clung to her head under her hat.

Cord, on the other hand, could have stepped right off the cover of American Cowboy. Except he didn’t have a two-day scruff, he wasn’t wearing a hat, and she was pretty sure he didn’t own a horse. Not anymore, anyway.

“Cuddle is your word, not mine,” he said, flashing his pearly whites at her. “I wasn’t asking you to snuggle up to—”

“Semantics, Cord.” She rested her hand on a cocked hip and exchanged his grin with a grimace. Speaking of pearly white… Her imagination conjured up a holster slung low at her waist, complete with a pearl-handled Colt .45 poised for the draw. Heck, her little Glock 19 would do the job just fine—.

Good grief, Faith. What job are you considering using any gun for? She cleared her throat, hoping he couldn’t read her uncharacteristically violent thoughts. “You’re a long way from home. What brings you to our neck of the woods?” What she really wanted to ask him was what had brought him to Seven Virtues Ranch. And couldn’t he have at least called first? Given her some kind heads up? Wasn’t that just common courtesy?

Cord turned his head briefly in the direction of Seven Virtues’ closest neighbor, Whispering Hills Ranch. Although nothing was visible through the wooded tract that marked the property line between the ranches, Faith was pretty sure he was picturing the abandoned hay barn on the other side of the small creek that meandered through the trees, same as she was. Not something she particularly wanted to dwell on, but his next words confirmed her suspicions. He spoke in a husky drawl. “How about a welcome back kiss, then? Purely unselfish motives on my part, I assure you,” he asked, shooting her a sideways look that made something coil tightly low in her gut. Then he chuckled, making light of his request. “In honor of Uncle Judge, God rest his soul.”

“I never once kissed Judge Flanner,” Faith retorted, hating that he could still get to her so easily. She crossed her arms and dipped her head, hoping her hat would hide the flush coloring her cheeks. Just the thought of kissing Cordell Overman again made her blood run hot. “Besides, he was a married man, so there’d be nothing honorable about it,” she added, narrowing her eyes at him. Judge was, in fact, a widower, but he’d been married to Cord’s aunt for more than fifty years before she passed away. “So, what did you say you needed? I really am busy, you know.”

Cord let out a low whistle. “Why, Miss Goodacre, when did you get so prickly?”

Prickly? She tried not to be offended by his question, but coming from Cord, the barbed word smarted. It was self-preservation, as far as she was concerned. “Why, Mr. Overman, how do you know it’s ‘Miss’?”

“Because I made certain of it before I headed out this way to see you.” The grin turned into a bold, piano key smile, one he’d used to charm her to his will a time or two—or two hundred—back in the day.

Even before he’d had his teeth straightened and bleached. Mercy, they were white. City boy.

“And I brought you something.” He spun on his boot heel—at least those weren’t new, she noted. He’d always preferred the Western work boots over more traditional cowboy boots. He reached into the open driver’s side window of his truck to withdraw a pale blue mason jar spilling over with red and yellow columbines, the delicate star-like blossoms bobbing their heads in greeting as he approached. Holding them out to her, he said, “For you, Fair Maiden.”

Faith couldn’t help it. She smiled.

“There she is,” he murmured appreciatively, dipping his head to look her in the eye. “There’s that pretty smile I remember.”

She pressed her lips together, trying desperately not to be impressed that he’d remembered, then she shook her head in surrender. Man, he was good.

She’d once pointed her favorite flower out to him where they grew in her mother’s gardens. She’d told him the fiery wildflower with its flared petals, and backward facing spikes made her think of fairy tale dragons. He’d plucked a small handful, dropped to one knee, and offered them to her, declaring he was her knight in shining armor, ready to slay dragons for her. Faith still carefully tended the bushes that grew in riotous disarray at the top of the long drive up from Carpenter Road. She had the sneaking suspicion that Cord had helped himself on his way in.

Except she remembered, too. She remembered just how not ready he’d been to fight for her when it came right down to it. Almost a decade ago, he’d kicked the dust off a pair of Ropers just like the ones he wore now, forcing her to armor up and fight the dragons herself. The fact that he stood in front of her today, that pie-eating grin on his face, told her he had no clue about the damage he’d left in his wake.

Be the first to review “Gotta Have Faith: A Seven Virtues Ranch Romance Book 1 by Becky Doughty” Cancel reply