You are here: Products Going the Distance by Gabrielle Glenn 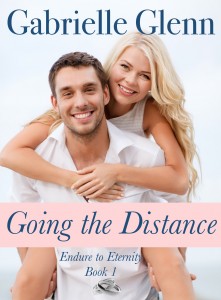 Going the Distance by Gabrielle Glenn

Jeanie Bennett’s matchmaking record is flawless. Over the last ten years, she has built her matchmaking business on her innate ability to connect wealthy men with attractive, capable women.

Jeanie’s New York-based six week dating program is unique. She creates tailored challenges for her clients based on their backgrounds, hopes and fears. Jeanie is also willing to manufacture challenges based on fictions. Couples are only allowed to indulge their physical desires after a full month has passed, a rule Jeanie enforces with uncanny ability. After resisting temptation for Jeanie’s month, when her couples finally find themselves between the sheets, the sex is explosive. If a couple can navigate through Jeanie’s obstacles and allow their passion to simmer before being released, Jeanie guarantees they will enjoy a relationship that can endure to eternity.

Jeanie’s latest client, David Hughes, is a retired NFL football player and successful businessman, who is ready to get married. Jeanie knows just the woman for him. Hannah Daniels is a former professional ballet dancer who has returned home to care for her mother and brothers after her father’s unexpected death.

Hannah’s reluctance to join Jeanie’s program, David’s demons from his past and their undeniable physical attraction threaten to not only torpedo their growing love, but Jeanie’s unblemished record as well. Can Hannah and David go the distance? Will their relationship endure to eternity?

Always a fan of undeniable love, someday she’ll write her own love story, about eloping with her husband after only knowing him for six weeks. This year, Gabrielle and her husband will celebrate nineteen years of marriage.

I have always loved romance! I love reading romance and watching shows like the Bachelor and Millionaire Matchmaker. My character Jeanie was inspired by Patti Stanger and her show. However, I wanted to take the matchmaking to a new level, which inspired the challenges Jeanie sets up. The idea is that if a couple can survive the challenges, they will have an unshakable bond. It is a fun way to explore the ups and downs of a relationship and watch a bond between two people form.

“No more waiting,” Hannah said, smiling back at him.
David leaned in and kissed her again, this time caressing her face with both of his hands. As he moved from her mouth down to her chin and then her neck, Hannah moaned. His hands moved ahead of his lips, forging the path to her greatest pleasure zones. She shifted on the couch, easing herself down into a reclining position, as his hands moved to her breasts, playfully squeezing each one.
“I’m falling in love with you too,” Hannah murmured as she struggled to catch her breath. David’s hands and his lips were almost too much for her to bear. She felt her heart rise and her breathing quicken as he dominated her body.
God that feels incredible.
He knew exactly what he was doing. He was slowly and continuously building up to a crescendo. She was almost afraid of how intense their love-making was going to be. She had been wanting this for a month and she knew that he had too. Hannah was impressed that he was taking his time now and not rushing through, since they had been keeping their passion at bay for weeks.
Hannah sat up and pulled her sweater over her head, revealing a black, lacy bra.
“Did you know it was a month when you put that bra on this morning?” David asked.
He looked serious.
“No idea. I just like wearing it. I have matching panties,” Hannah said, smiling playfully.
She knew that she wasn’t really teasing him, since they wouldn’t have to stop themselves this time. Tonight, they could go all the way. Hannah felt an intense tingling between her legs and his eyes danced while he ogled her body. She loved the way he was looking at her, like he wanted to devour not only her body but her soul. The anticipation was almost too much.
“Are you trying to kill me?” David asked, staring at her lingerie.
“I don’t think you’ll actually die,” Hannah said, unbuttoning her slacks.
David helped Hannah jiggle out of her pants, while his eyes roamed from her breasts to her panties. “Yes, you are trying to kill me. You look amazing in those black panties.” He was now on his knees, with his body in between her legs, leaning over her. He resumed kissing her breasts, but soon abandoned them for her stomach, while his hands freely roamed the rest of her body. His hands first stroked her breasts and then moved to her inner thighs, gently pushing them apart further. Then, while his lips rotated around her upper body, his hand slipped under her panties, touching her lower lips. At first he rubbed her gently, taking his time getting her ready for the rest of him.
Oh my God, he is getting me so hot.
Hannah was ready for him now. She didn’t want to wait any longer. She had never wanted a man so badly in her life.
“I want you,” she murmured to him.
“Not so fast. I’ve waited weeks for this. We’re going to take it slow and enjoy every minute,” he whispered back to her, in between kissing her breasts.
“Now you are trying to kill me,” Hannah said.
David chortled a little, but went straight back to his business of torturing Hannah.
It feels sooo good.
“Keep doing that,” she said, guiding his hand deeper inside her. She was so moist, his fingers easily slipped in and out of her. Too easily. She had gotten herself so excited, that she needed something more than his fingers. She wanted all of him.
“Take me to the bedroom,” Hannah said, moaning as he played with her.