You are here: Products Going Down Easy by Carly Phillips 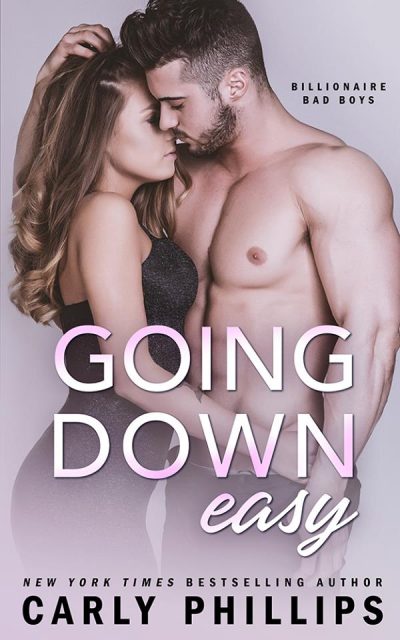 Going Down Easy by Carly Phillips

Alpha-licious in the most unexpected ways, Kaden Barnes always gets what he wants.

After a successful fifteen-year career with various New York publishing houses, and over 40 sexy contemporary romance novels published, N.Y. Times and USA Today Bestselling Author Carly Phillips is now an Indie author who writes to her own expectations and that of her readers. She continues the tradition of hot men and strong women and plans to publish many more sizzling stories. Carly lives in Purchase, NY with her family, two nearly adult daughters and two crazy dogs who star on her Facebook Fan Page and website. She's a writer, a knitter of sorts, a wife, and a mom. In addition, she's a Twitter and Internet junkie and is always around to interact with her readers.

Even with the anxiety over her first day of work at her new job looming, Lexie Parker still took the time to count out the brightly colored pills and filled the plastic holder, labeled by individual days and divided by a.m. and p.m. doses. She separated each medication and double-checked the dose on the list provided to her by her sister’s doctor. In a separate pill holder, she included a daily dose of antianxiety medication, also doctor-prescribed and approved.
She clicked each holder shut tight, then left the plastic containers next to the cookie jar in the kitchen for her sister, along with ten dollars for coffee and breakfast downstairs at the market on the corner. Any extra change would probably be hoarded for shopping, but she’d accepted that particular vice. As long as she could keep Kendall on her meds, Lexie could breathe more easily. Her sister might not appreciate the effort, but Lexie knew, if not for her, the psych ward was waiting. Again.
Her sister’s dog, Waffles, a small terrier mix she’d adopted during one of her manic phases, jumped up and down, begging for a treat.
“No. You just had breakfast, you piggy,” Lexie said, bending to pat the tan fluffy dog on the head. “You’re on a diet.” Her sister tended to overfeed him, when she remembered to feed him at all.
Lexie ticked off her list of morning chores, satisfied she’d remembered everything before sparing a glance at the second bedroom in her apartment—paid for with her father’s money. His way of showing gratitude for her sacrifice. She’d lost her last job because she’d been too busy looking after Kendall during her last depressive episode. The one that had landed her in Shady Oaks.
Lexie hated accepting her parents’ money, but she’d been unemployed and out of options, and they’d leased this apartment for them a few months ago. After her sister’s doctor had agreed to release her following a two-week stay in the psych ward, as long as she lived with someone who could keep an eye on her. Though her parents had a huge home on Long Island, Lexie had taken the burden off of them and agreed to the new living arrangement.
After all, Kendall was her twin. And her father had his hands full with her mother, who suffered from severe depression. Yes, her family had fantastic genes. Lexie always feared she was one bad mood away from falling prey to the same demons that consumed her mother and sister.
Lexie rushed into her room to get ready for her first day at her new job. The position wasn’t glamorous. She’d been hired on as a personal assistant to a software mogul whose company her father was investing in. Her employment was a favor, since she didn’t have a glowing letter of recommendation from her last job.
Her dreams of working in a PR agency in Manhattan had disappeared when she transferred to a local college not long after her sister had returned home following her first breakdown. Lexie had taken classes and finished her degree but wasn’t able to build a career that lasted. Life was always busy, and her twin’s periods of stability weren’t long enough.
Despite her busy morning routine, Lexie couldn’t afford to be late. She’d read the online write-ups on Kaden Barnes, software billionaire whose company was giving Snapchat a run for the money. Kaden was the financial guru behind the business, and if his partners were to be believed, he couldn’t keep a personal assistant because he was too difficult to work for.
She wasn’t worried … much. The one thing Lexie was good at was keeping other people organized and ignoring frustrating personalities. She was sure she could deal with the stuffy billionaire with a stick up his ass.
She dressed in her best skirt and blouse, chose a pair of heels she could walk in without too much pain, picked up her purse, and started for the door.
“Lexie!” Kendall called, yanking her door open and rushing into the room. “I had the best idea for a job. What if I board dogs?” she asked, scooping Waffles into her arms. “You want playmates, don’t you?” she asked, nuzzling the pup’s fur.
Drawing a deep breath, Lexie turned. “We aren’t allowed more than one pet in this building, so I’m afraid you’ll have to keep thinking. I have to get to work, so we’ll talk later. Your meds are on the counter and so is money for lunch.”
“God dammit, you’re not my mother. I’m twenty-eight years old! I don’t need a babysitter,” she exploded. She bent and placed the dog on the floor, then glared at Lexie.
No, the meds hadn’t calibrated correctly yet, she thought, trying her best to maintain her composure. When Kendall was level-headed, she appreciated Lexie’s efforts at helping.
Ignoring her outburst, otherwise she’d end up engaged in a full-on war of words, which was what her sister wanted, she waved good-bye. “See you later!” she said and rushed out the door.
Unfortunately, when she reached the ground level and exit and opened the door to the street, rain sprinkled down just as the bus she planned on taking pulled up to the corner.
There was no time to run back upstairs for an umbrella, so she braved the rain and hoped she didn’t look like a drowned rat by the time she arrived at her new job.