You are here: Products Gods and Heroes by Hercules Bantas 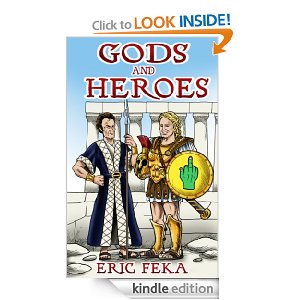 Gods and Heroes by Hercules Bantas

The Mad God Monos, who insists that his worshipers eat meat only on Wednesdays and have, um, relations only during the full moon, had mustered an army and was poised to invade Helvenica. He was determined to drive the old Gods into the spiritual wilderness and establish himself as the One God.The people of Helvenica needed a hero, a brave warrior to stand up to the usurper and defend their right to eat meat every day and relate whenever they pleased. What they got was Fotio, a reluctant hero with a bad attitude towards religion and a tendency to daydream.