You are here: Products Goddess & the Geek by Louise Cusack 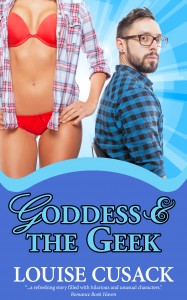 Goddess & the Geek by Louise Cusack

Career academic Julian Wilde has a month booked at an island hideaway to finish his PhD, but when he arrives, sexy oyster farmer Natasha Barri grabs him thinking he’s a burglar and suddenly asthma isn’t the only thing making Julian breathless. The house has been double booked so they’re forced to share and Julian readily agrees to cook, hoping to use the voodoo potions he’s discovered online to make Tasha fall in love with him. Disaster follows debacle as Julian tries to impress her, and she tries not to kill him.

She writes about intrepid women entering worlds that are new and strange to them – Strangers in Strange Lands – whether that’s an everyday woman from our world traversing a portal into a sepia kingdom, an amorous mermaid stranded on dry land, or a reclusive oyster farmer who must face the modern world when a geek arrives on her doorstep. Louise also works with computer games companies to develop fantasy and sci fi world-building. As an avid reader, however, her first love will always be books.

The characters jumped into my head one night as I was falling asleep and they were still there when I woke up: prickly Tasha giving poor Julian dagger eyes and wanting him gone. I knew they were perfect for each other and I simply had to stop what I was doing and let them have their story.