You are here: Products GLADON’S PROMISE: A Not So Simple Tale Of Love & Letting Go by Anna Julia 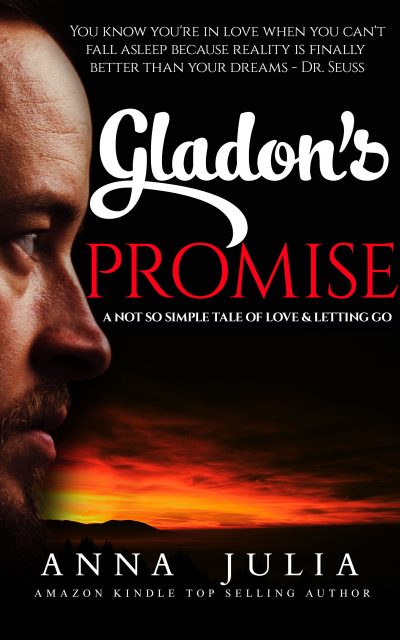 GLADON’S PROMISE: A Not So Simple Tale Of Love & Letting Go by Anna Julia

The story begins with the death of Kathleen Gladon – wife of the wealthy businessman Nick Gladon. He can buy anything with his money but he cannot use it to revive his dead wife. He was in deep pain until one day he discovered information: that could bring his beloved wife back.

How did he find it? What helps him reunite with his wife?
GLADON’S PROMISE is short story romantic suspense new releases, romance in new england. You will not be able to predict the ending without reading to the very last page. Sure, it would be best romance novels 2017.

GLADON’S PROMISE is divided into several short chapters to help readers easily keep track of where they left off, should anything step into halt you reading pleasure. It will best romance novels 2016.

Walk into an interesting book that is attractive, and has a meaningful message about love and letting go with love. What did Nick Gladon do to fulfill his promise to bring his dead wife back?
If you’ve been bored with overly long books and you want a short story to read over the weekend, a story that will make you sleep better with beautiful dreams, romance novels with angst, top mystery books 2017, romance new releases 2017, then “GLADON’S PROMISE: A Not So Simple Tale Of Love & Letting Go” – will be the best choice for you!

Chapter 1: Searching
Inside a brick built library, a middle aged man rummaged in the dim light from several wall mounted candles. The tightly woven decorative rugs, along with the thick closed curtains, helped to muffle the rustling of books. The lone library sat patiently while its after-hours visitor continued his search through its offerings.
He frowned while allowing a low growl to rumble from his throat. If any would have it…it would have to be her. The middle aged man gruffly thought with a growing frown on his face. He snapped the hardback book shut, venting a little of this frustration.
His thought drifted and his grip tightened on the books binding for a moment. His jaw tightened and the book was roughly shoved back into place, kicking up a little bit of dust from a couple books to the left and right falling over.
He took a step back and made his way to another book stand on the far right wall. The fire reflected off his short, styled back frosty light brown hair. His eyes skimmed over different titles. “‘Legacy of the Gryphon,’ ‘Fire’s Magical Wonders,’ ‘Water Sprites and Their Tears…’” he muttered quietly under his breath with a growing dullness to his tone.
A breath released in irritation upon the adding frustration on top of the previous hours he spent searching the decent sized library. “Don’t tell me this Scholar Sage was not as I came to believe. She was proclaimed to be the expert on magic and magical artifacts from history.”
Once he was standing in front of the stand, he scanned over the spines text. Nothing, nothing, nothing, he thought with annoyance until his twisting expression began to lessen up, falling into curiosity as one book caught his eye. Hm? A hand reached up and went to pluck the scooted out book off the shelf by grabbing it by the top of its binding. This resulted in a ‘click’ sound to echo through the settled and nearly quiet air.
The book, as he removed his hand, began to open a bit before the sight of movement to the left drew his attention. He made his way the two steps over and watched as a small set of books began to part. This is interesting. He involuntarily coughed as more dust began to rise from the shelf, waving his hand to clear it away. What had come into sight was a unique book with a spine that held a diamond cut jade stone at the top and bottom.
Reaching in, he plucked the book free of its brethren. The hard surface had a layer of leather covering its textured back. The cover was a pale brown with letters pressed into the surface spelling out ‘Researcher’s Log’ below times dust. Quietly he opened it and began to flip through the musty, thick parchment. It seems looks can be deceiving here. Quite a good way to keep the public away from what she wants protected. He softly chuckled in his throat, closing his eyes momentarily. Too bad I stumbled across her little secret hiding place.

Be the first to review “GLADON’S PROMISE: A Not So Simple Tale Of Love & Letting Go by Anna Julia” Cancel reply