You are here: Products Giving in the the Brat by Lana McRae 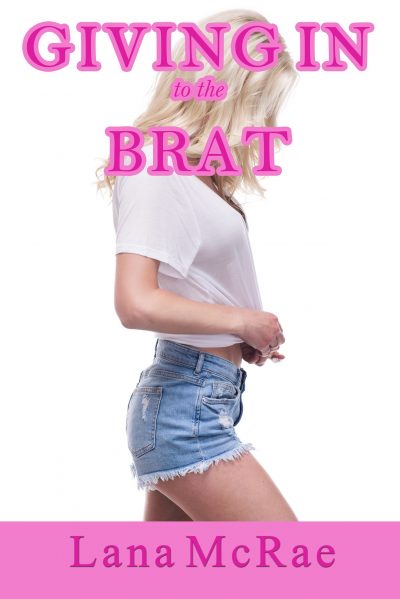 Giving in the the Brat by Lana McRae

“Ty, do you know how much I really love you?” I blurt. I’m glad it’s dark and he can’t see my face because it just turned a thousand shades of red.
Emily: I have always had a thing for Tyler. He was a little older, popular and oh, so cool. My admiration for him had grown stronger over the years, from an innocent crush to a deeper connection. Could I tell him? More importantly, should I tell him? There’s a lot to lose if I do.

The young man of the house knows how to make an innocent young lady beg for more, hard and unprotected.

Lana McRae is a typical good girl gone bad. She recently quit teaching in order to share her impure thoughts with anyone willing to read them. Lana lives in the deep woods of Montana with her partner, kids, and pets. When she's not enjoying the great outdoors, you'll find her curled up in front of the fireplace cranking out her darkest fantasies on her metallic purple word processor.

I was inspired to write this book after sitting outside with my husband on a chilly fall night watching a meteor shower. Just the two of us, alone, while the rest of the world slept.

I realized while I was in high school that I had fallen desperately in love with him. I never told a soul, though, and it tortures me every day. I was glad when he moved across the state and wasn't in my life anymore other than his quick calls home or the occasional visit. Now here he stands, looking delicious and so available for a weekend of fun. I swallow hard at the possibilities that flood my mind.
"So, we're on? You know my dad and Kelly will be gone until Monday on that cruise, so it's just you and me," he says. Our parents booked a weekend cruise, and because it falls on a holiday weekend, both Tyler and I are home alone. My heart beats wildly because I can't get him off my mind.