You are here: Products Gift of Diamonds, Book One of the Transylvanian Trilogy by Roberta Seret 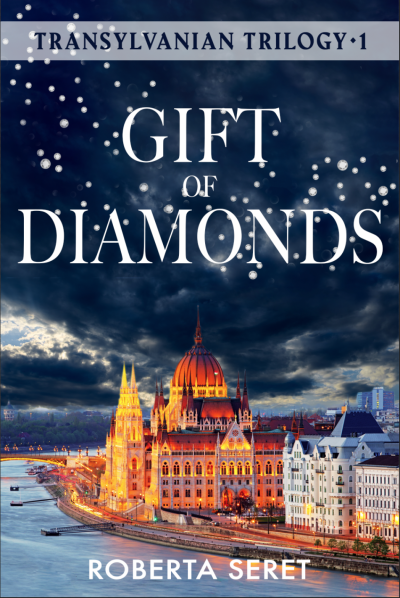 Gift of Diamonds, Book One of the Transylvanian Trilogy by Roberta Seret

Seventeen-year-old Mica is a determined aspiring actress living with her parents in Romania as Nicolae Ceausescu begins his reign. Her parents are covertly political and influential, which makes them a perfect target to be stopped by the Secret Police. They’re soon arrested, leaving Mica to flee the country with her father’s rare—and possibly cursed—diamonds. With her parents imprisoned, it’s up to Mica to investigate the terrorism involving Ceausescu and his nuclear business partners. Will revealing the truth to the world finally bring her the peace she seeks? Gift of Diamonds reveals hidden secrets of how Fascism led to Communism which began the seeds of modern-day Terrorism.

ROBERTA SERET, Ph.D. is the founder and executive director of the Non-Governmental Organization (NGO) at United Nations, International Cinema Education Organization and the Director of ESL and Film for the Hospitality Committee of the United Nations. She is an adjunct instructor at New York University in Film and has published various articles in film review for the Journal of International Criminal Justice and Oxford University Press. Her work in the United Nations Global Classroom has been praised by various influential Americans, including Michelle Obama, Mike Bloomberg, and Caroline Kennedy. The Transylvania Trilogy is her first fiction series. She resides in New York City with her husband, and has two sons.

“NO, NO, JULIET. NOT LIKE THAT!” the white-haired director yelled. Mica stopped reciting her lines. She hated displeasing Mr. Marinescu. He had taught her so much and introduced her to the love of her life: the stage. “Your words must come from your heart,” he explained. “Act as if you’re a woman, not a child. Think of every‐ thing you’re losing!”
Mica squeezed her eyes tightly. It was difficult to be unhappy when she was playing Juliet and Romeo was as handsome as Nicky Strancusi. But she did as directed and turned her thoughts to the secret police, who had come yesterday to their house in the middle of the night. “We’ll be back,” the chief had warned her father. “Until we find out what you’re up to.”
“That’s it, Mica! I feel your fear,” the director shouted. Fear, yes, for my parents, she thought.
“You must get this right. Romeo and Juliet is the first Shakespearean play the people of Spera will see.”
Her eyes wandered past the chandelier with only one light bulb, to the tattered red velvet curtains and crumbling cement walls. Modern times seemed to have forgotten her town at the Romanian-Hungarian border.
“Start from the beginning of the balcony scene one more time,” Marinescu shouted. “Remember, people, tomorrow is opening night.”
Mica tried to forget that the freezing room was no longer an elegant theater; that the broken chairs hadn’t held an audience in years. She concentrated on being Juliet. They began and Mica moved closer to the edge of the stage. Taking a deep breath, she recited her lines:
“My bounty is as boundless as the sea, My love as deep; the more I give to thee, The more I have, for both are infinite. And all my fortunes at thy foot I’ll lay And follow thee throughout the world.”
Marinescu stood up and applauded. Waving his beret, he yelled, “Brava, Mica!”
She took a deep bow and smiled, imagining how everyone in Spera would applaud her tomorrow night. Emile Marinescu’s pro‐ duction of Shakespeare in English was such a big event that even people from Bucharest were traveling to their small town to see it. And she was the leading actress.
Holding Nicky’s hand, she practiced a curtsy while he bowed and then kissed her cheek. She felt her body turn warm. This was the only thing that could keep her from worrying about her parents.
Then Nicky led her into the wings, where he put his arms around her waist, pulled her near, and brushed her lips with his. It was magical, better than she’d imagined, but Mica was pulled instantly back to earth by the sound of the tram station’s clock
striking 5:30. “Oh, no,” she whispered to Nicky. “It’s almost curfew.” She was afraid that she wouldn’t have enough time to get her father his dinner and take it to him and then be home before seven. The police seemed to be patrolling more actively than usual.
Nicky gave Mica one last kiss. He moved her closer and held her tighter, kissing her neck. She closed her eyes to enjoy his near‐ ness, and the thrill of his passion. Then, suddenly, upon hearing another clock chime, she moved away and put on Juliet’s Shake‐ spearean coat. She smoothed down her short, cropped black hair and whispered, “Forgive me. I must go!”
She raced through the theater’s dark corridors and climbed the broken-down stairs. Still tingly from Nicky’s kisses, she was struck by the freezing cold outside. Her hazel eyes teared and her face stung as if tiny knives were piercing her skin. Running through the dark, she shuddered at the thought of being alone in the empty tram station.
She moved toward the shadow of the barbed-wire fence where she had locked her bike. Someone tapped her shoulder. She stopped breathing and turned around slowly. Relieved, she saw Nicky, her Romeo, grinning down at her. When Emile Mari‐ nescu had chosen her out of the twenty-five girls who had audi‐ tioned, she had thought only of her role. But then when she saw Nicky Strancusi, a nineteen-year-old engineering student, she couldn’t believe her luck. He was so handsome. Six feet tall, thin but muscular with broad shoulders. Black wavy hair that he wore long, covering his ears. He looked like a Roman god she had seen pictured in history books, with blue eyes and devilish smile. After four weeks of rehearsing together, she felt she could give herself to Nicky. Enjoy him without restraint, for the very first time.
He leaned toward her and rested his elbow on her bicycle seat. “‘Delay this marriage for a month, a week. Love only me,’” he told her, reciting his lines.
Mica laughed, wanting to believe that his Shakespearean lines were what he truly felt.
Nicky took her hand into his. “Let’s practice our lines together. Alone. We have an hour and a half until curfew.”
She was tempted to say yes. She wanted so much to be with him, feel him close, feel his kisses, but she sighed. There wasn’t time. “I can’t.” Reluctantly, she climbed onto her bicycle.
He unclasped her fingers and softly kissed the open palm. “Don’t forget tomorrow’s cast party after opening night. We’re having champagne and caviar. One of the girls got them from her boyfriend.” Then Nicky’s face turned sad. “Only someone from the secret police can find champagne in this country when there’s not even milk for a baby.”
Mica nodded sympathetically. She hated the Securitate, especially after they had raided her home yesterday in the middle of the night and threatened her father. “You’re on our blacklist now! We’re watching you!”
She turned to Nicky and whispered, “I can’t talk… ‘I must be gone and love, or stay and die.’” As she got on her bike, she tried to sound more cheerful, “Till tomorrow, Romeo.”