You are here: Products Ghost of Shade by Rose Deangelo 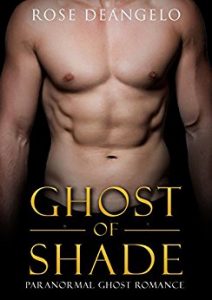 Ghost of Shade by Rose Deangelo

Rose DeAngelo is a thirty-something, who loves dogs, kids, elderly people, and books. She works a regular 9 to 5 at an organic grocery chain that many know and love, yet still, she always makes the time to get lost in her writing. She’s a sucker for a steamy story line, and is often daydreaming at her 9 to 5 about her next story. Just some of her favorite authors include: Lian Moriarty, Joe Hill, Harper Bliss, and Kelley Armstrong.

“911. What is your emergency?”
“Help! Help!He-” The 911 operator winces at the loud crash on the other line.
“Hello? Are you there? Sir, what is your emergency?”
“They’re in my house trying to kill me. I don’t know who. I have been stabbed…please, send help.” A man whispers into the line.
Click. “Hello? Sir? Hello?” Sighing, the 911 operator dials dispatch. “Marty, we have a man at 224 Belmont calling about an attempted murder. He says there are people in his house trying to kill kim. He hung up on me. I couldn’t get any more information.”
“We’re on our way. Thanks. Trixie.”
“You’re welcome. Be safe.” Trixie sighs as she hangs up the receiver. “I hope they save him,” she whispers to herself. This job was going send her to an early grave.
Three minutes later, the police are stationed in the right spots surrounding the house. All police car lights are on, surrounding the house. All police car lights are on, highlighting a sinister shadow along the exterior of the house. Chief Marty Krueger is making sure his men are in line as they get ready to burst through the front door.
“Everyone in. Anderson, did you check the perimeter?”
“Yes, chief. Willis and I checked. Nothing appears to be going on in the house. We didn’t see anything. Nobody answered when we knocked.”
The chief rubs his forehead. “Lets file in. We’re going to break in the door. I need two men in front, two men in back, and you three stay back by the cars in case you see anyone trying to escape.” He motioned with his hand for the other officers to come forward.
It took three tries for the man to break down the door. Marty’s senses were immediately overwhelmed by the smell of death and rotten food. Marty covered his face, “Something is not alive in here boys. Heads up and be careful what you touch.” He stepped over a spilled fast food drink, surverying the seemingly orderly house. It was fairly new and still smelled like drying paint and construction, among the acrid smell of death.