You are here: Products Ghost In The Machine by C.E. Kilgore 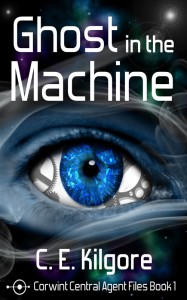 Ghost In The Machine by C.E. Kilgore

“Love is like a wormhole. You stumble on to it blindly, it sucks you in and takes you somewhere completely unexpected. You can’t fight it, because that would tear your ship apart. You can’t control it, either. All you can do is set your thrusters on glide and let it take you where it’s going to take you.”

Going against the rules of her Vesparian Sisterhood, which seeks to keep its entire existence a secret, Orynn is thrown into the open by a request for help that she could not refuse. Seeking to reconcile past mistakes and gain a forgiveness she feels she does not deserve, the control over her empathic abilities is put to the test when the darkness that lives within her spirit threatens to once again destroy any piece of happiness that she allows herself to find.

As a Mechatronic Automaton, Ethan defines his world through a set of logically defined values and understandings. Encountering Orynn throws his system out of balance as he tries to decide if he should trust the feelings he is developing, or if he should follow the logic telling him that she is trying to control him for some unknown purpose. Should he keep her at a distance despite his want to bring her near, or should he follow the heart he swears he does not have? As his understanding of her develops, he begins to question all of his preconceived notions about both himself and the universe around him.

In his attempts to capture the Vesparian prey he has been hunting after for two decades, the First Commander of the Xen’dari fleet will stop at nothing and track Orynn to the ends of the universe. On a path of vengeance for a past he can’t let go of, he will do everything in his power to burn her world down around her feet until nothing is left but ash and the bitter taste of regret.

Ghosts of the past clash with hopes for the future in this first book of the series, set in a universe where nothing is as it seems at first glance and trust is a highly priced commodity.

C.E. Kilgore (1981 – ) has always had a love of romantic stories and science fiction. Although active in the writing community during her undergraduate studies, she chose to focus on her love of history and culture. Graduating with an HBA in History and a BA in Cultural Anthropology, she puts a deep emphasis on creating characters and environments within her writing that are full of both culture and history. The relationship development between characters and the worlds they live in is also an important aspect of her stories. Sarcasm, comedy, hidden “modern” references and subtle hints at underlined universal meanings are common within her writing style, but there is always plenty of action and a darker side lurking just around the corner.

I have a deep love for Science Fiction and the exploration of the many facets of love. My series will use each book to explore different types of love, from fast falls head-over-heels, to friends growing into lovers, to unrequited love, to even the obsessive love that can develop into something violent and dangerous. In the first book, I sought to explore how two individuals who both thought themselves incapable of love would deal with an intense, immediate connection and attraction. Would they accept it? Would they run from it? This exploration is taken further by having the male protagonist being a Mechatronic Automaton (a human like android) who struggles with emotions as a whole.

Be the first to review “Ghost In The Machine by C.E. Kilgore” Cancel reply