You are here: Products Gare de Lyon by Bill Lockwood 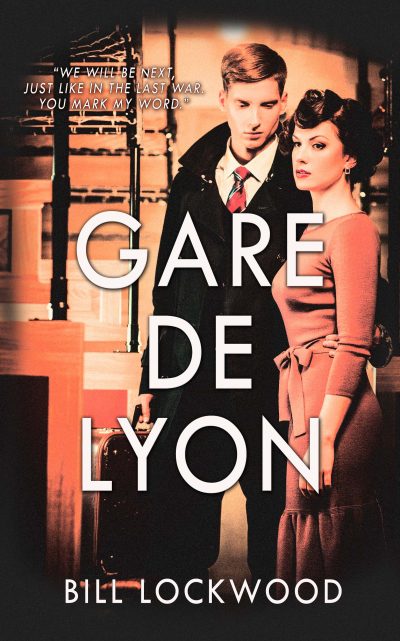 Mary O’Riley, native of Boston, goes to Paris to study art on the eve of WWII. Caught in the occupation she works in a bakery but finds herself frequently carrying messages for her boss. When the Gestapo raids the bakery and arrests the owner, Mary must flee Paris to avoid her own arrest, and the Resistance group she has helped assigns her to escort a downed RSF flyer south to Lyon.
Freddy Winston volunteered to fly secret missions to occupied France. On one of his runs, gunfire surprises him as Resistance members unload passengers and supplies. The plane catches fire, stranding him behind enemy lines. Freddy doesn’t like that Mary is Irish. She insists she is just American. They may not like each other but discover quickly they must team up to reach their mutual goal of escaping the Nazis.

Now a retired State social worker for both the States of Maryland and Vermont. By night He has always been active in community theater and writing. He moved to Southern Vermont in 1992 and became active in the Bellows Falls community. He was the Greater Falls Regional Chamber of Commerce Person of the Year in 2006 in recognition of his work as Chairman of the Bellows Falls Opera House Restoration Committee. He wrote articles covering the arts, and interesting people in the “Bellows Falls (VT ) Town Crier” from 1998 through 2006. He also wrote articles for other local publications as well as Vermont tourist magazines. Currently He freelances with the weekly “The Shopper/Vermont Journal” and daily “Eagle Times”. He has had five historical fiction novels published by The Wild Rose Press, “Buried Gold, 2016, “Megan of the Mists” 2017, “Ms. Anna” 2018, “The Monsignor’s Agents” 2020, and “Gare de Lyon” 2021. His short story “The Kids Won’t Leave” appeared in the Fall 2020 issue of “Two Hawks Quarterly”, and “Pizza, Pizza” appeared in “The Raven’s Perch” April 28, 2021.

I was stage managing a community theater production of "Cabaret" which is set in pre WWII Berlin. I got me thinking of an idea I had about a story with an American art student who gets trapped in occupied Paris and then falls in with the Resistance. The Covid lock down cancelled "Cabaret" tow days before its opening, and, being now retired, I had plenty of time after to write my story.

“The Germans have marched into the Rhineland,”
Madame Gagnon said. “We will be next. They will
march for Paris, just like in the last war. You mark my
word.”
“No, no, Madame.” Maurice laughed. “My father is
a veteran of that last war. He assures me this time our
great army will hold firm.”
Madame Gagnon quickly disagreed. “They almost
reached Paris in that war. They bombarded us with their
artillery.”
“But Paris remained otherwise out of their reach,”
Maurice said.
“There was fighting in Spain before I came here,”
Marie added. “People told me not to come here, but I
have found what I came across that big ocean to find.
Paris has been safe and perfectly wonderful for me.”
“Ah, that is so.” Madame Gagnon gave a shrug.
“You are both so young. You are not old enough to
have the memories that I have. You do not see the
world as I do.”
“Yes,” Marie said brightly. “France is not at war
right now. Maybe it will be, but for now, things are
good for us at the school. We must enjoy life as it is.”
Maurice pulled Marie toward the stairs. He
laughed. She laughed. And they hurried to her
apartment up the stairs.
Madame Gagnon frowned and shook her head.
Then she shrugged again. “They are so young,” she said
out loud, as if she had to explain, though no one else
was there to hear her.