You are here: Products Garda ~ Welcome to the Realm by Stacy Eaton 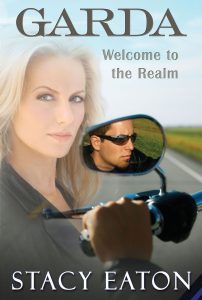 Garda ~ Welcome to the Realm by Stacy Eaton

There is a place that lies between heaven and Earth, it is called The Realm. Within this place, the Guards of Peace, known as Garda Síochána, learn to guide and protect the ones that live below until they are called home.

Officer Corey Hamilton is dedicated to being the best that she can be, in uniform and out. Her loving nature, compassionate thoughts, and warrior strength make her the perfect candidate to join the Garda Síochána and spend her eternity protecting and guiding others.

Just before Corey dies in a line-of-duty accident, she meets Officer Mitchell O’Reilly. Her feelings for him may change her destiny, but not for the better, as she falls in love with this married man. Brock, Corey’s personal Garda, will bring her home to The Realm and attempt to train her for her future, even while she still fights for her past.

Will Brock be able to direct Corey down the right path, or will she cross the line and fall from grace?

Join Corey, Mitchell, and Brock for an emotional and heart-pounding adventure that is sure to make you wonder if angels are really guiding us in our everyday lives.

As a police officer, I often thought about having a guardian angel watching over me. This story came from those thoughts late at night as I patrolled my area.