You are here: Products Full Trust by Ann Bradford 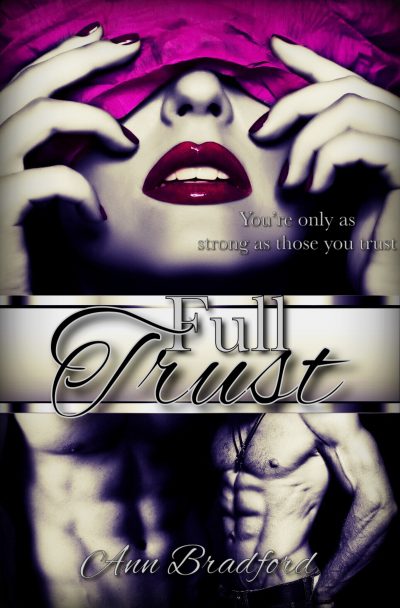 You’re only as strong as those you trust.
​
Andy has lived with memory loss since he was a young boy, but after he finds Hadley’s nightgown torn to pieces, he panics and refuses to be alone with her. What is his alter ego doing when he blacks out? He needs someone he trusts to keep him in line during these heated moments. But after his best friend’s betrayal, he doesn’t know who they can or should trust.
​
You protect her when I can’t.

Peers is finally in a better place in his life. He has a good career, friends, and by giving up sex, he’s managing to keep his strange fevers under control. But when he stumbles on Hadley in a dangerous situation, his past feelings for her come rushing back at him, spiking his fevers. Gripped by a determination to keep her safe and rekindle their smoldering hot affair, he agrees to meet Andy…

Bound by a promise, family by choice.

Hadley is in trouble. A drug dealer from her past is making her life hell. Andy keeps slipping into his alter ego at the worst times. Her feelings for Peers are getting hard to refuse. And Andy’s best friend is back, determined to come between them. When she arranges for Andy and Peers to meet, she has nothing to lose, her life as she knows it is over. What she didn’t expect is just how deep Andy and Peers’ pasts entwine, or how hot—fevered hot—things will get.

Warning:This book contains explicit descriptions of romantic activity between three consenting adults. This erotica is m/m/f combination. Only mature readers 18 years or older should download or order this book.

About Ann Bradford
Romance and erotica author Ann Bradford was born and raised on the prairies. She loves her rural lifestyle and hopes the passion for the simpler things in life slips into her writing. A romantic at heart, Ann enjoys nature, reading, and spending time with her family and St Bernard. Ann is happily married with two children and works for a non-profit organization.

I was actually working on another book, but these three character in the story had a strong chemistry that didn't fit with the genre and so I pulled them let them loose.

When Andy woke the next morning, Hadley stood at the end of her bed, her hands strangling the bedpost.
He felt as if he woke from a deep sleep. Still, Andy knew why she looked so frightened; he’d gone ape-shit on her. How long had he blurred out? The nightgown she wore to bed was in one piece and there were no visible marks on her. The room didn’t smell like sex. “You hurt?”
She shook her head. “You only cried out in your sleep again.”
Relieved, he rolled into her pillow. It smelled like a mix of sweet trees, reminding him of the Russian forest. Or maybe that was the nightmare lingering. “Bad dream. Come back to bed.” He needed to keep her close. It was better when she snuggled in his arms. Everything was better with Hadley close.
“Andy.” Her voice shook.
He couldn’t look at her. He didn’t have to, anyway. Andy knew her features by heart. She stood there with her orange curls an untamed mess. Her eyes were a vibrant coffee brown marbled with black. They reminded Andy of an antique dresser someone reworked from broken shambles, pouring love into each piece, creating a breathtaking work of art. His Hadley. So deep, he’d never know the stories embedded in her soul.
How weak did he look? What had he said? Had he screamed? What kind of guy yells out in his sleep two nights in a row?
Sitting up, Andy pulled his shoulders back and tightened his jaw, coming off stronger for her, but he needed her in his arms. She was his strength. Everything about her was strong. He marveled at her. How could she stand in the same room as him so bravely?
“The nightmares are getting worse,” she accused him as if Andy had any control over his dreams.
Yet, he hated it when she sounded so upset with him.
“Tell me what to do,” she demanded. “How can I help you heal? Andy? Look at me. What do I do?”
He couldn’t look at her. She wanted to help him? Funny, since Andy spent every waking hour helping her find peace with her past, their past, with everything haunting them.
“Andy. Please.” The pain in her voice forced him to study her.
It took a year of not touching her the way he wanted to realize he wasn’t seeing her the way she deserved. These new eyes told a harsh truth; he could do more for her. He could spoil her and fly her all over the world, maybe even shower her in those fluffy skirts she liked to wear. Yet here he was, ignoring those panicked brown eyes and seeing nothing but nipples poking into the gentle fabric of her nighty. Why did her body make him forget…everything?
It didn’t matter that she wore clothes, either. Damn. He knew those curves by heart and couldn’t rip his eyes off those hard nipples. They screamed for attention, yet blamed him for the shake to her voice. Almost a year since he remembered tasting her freckles. A year. Three hundred and sixty-five days. Well, the days were easy. The nights were killing him.
Andy rubbed a hand over his forehead, 8,760 hours, and still he feared he’d made a mistake.