You are here: Products From Zero to Xena: The Ring of Change Saga by T.F. Wright 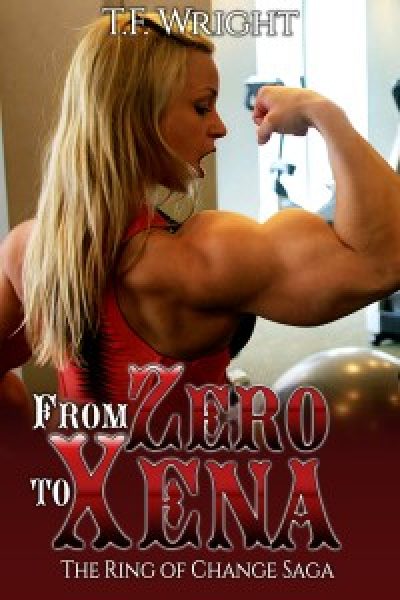 From Zero to Xena: The Ring of Change Saga by T.F. Wright

A shy, out of shape girl named Zoe has a crush on her new personal trainer. Jim, though, is tired of training people who don’t care about fitness. He longs for a protege, someone who he can mold into the perfect athlete. Jim is about to find out what happens when he gets his wish, and the magical Ring of Change begins to alter Zoe’s figure and her personality. In fact, he’ll wind up learning a lot more about the ring than he ever expected – he’s in for a big surprise when he puts it on himself!

I like the idea of personality changes, body changes, and more. The characters end up polar opposites from where they started, and to me that’s fascinating. I also think that the current trend of super macho men and submissive women is fine, but its not for everyone and I wanted to create something that would show a different kind of loving.

Xena and Jim elbowed their way into the crowded subway car. It was so packed that they could barely turn around without hitting someone.
“Out of my way,” Xena barked, when a man accidentally bumped her.
Standing still didn’t sit well with Xena, and before long she felt a longing to work out again. She placed both hands on the bar above the hand rails, and attempted a pull up.
She succeeded – both in the pull up and in getting the attention of those around her – but it was too easy. She switched to pulling herself up with just one hand. This time, however, the metal bar buckled under the strain, and went crashing down.
“Sorry, everyone,” Jim found himself saying. Nobody had been hurt, fortunately, and they scurried out on the next stop.
“We’re still aways from the park. Do you want to grab another subway, or take a cab?” Jim asked.
“Hell no, let’s just walk it,” Xena said, and took off at breakneck speed down the street. Jim took off after her, initially matching her stride. As the blocks blurred past, though, Jim could feel his legs growing stiffer with exhaustion, while Xena’s legs seemed to be growing stronger. Her calves began to swell until they reached the size of grapefruits, while her muscular thighs thickened into massive tree trunks.

Be the first to review “From Zero to Xena: The Ring of Change Saga by T.F. Wright” Cancel reply