You are here: Products From The Embers by Spring Horton 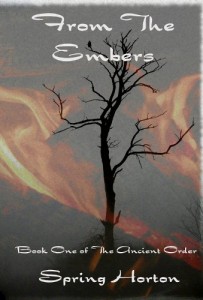 From The Embers by Spring Horton

Follow the lives of two immortals, Dorian Thorne and Mathias Sorensen, from their early years, to the apocalypse and beyond. These two men first cross paths in Victorian London, an encounter which does not leave them on friendly terms. They are fated to meet again though, in the present, the year 2095. From the Embers is not only a story of civilization trying to rebuild after the end of the world, but also one of two men trying to rebuild their wounded and shattered souls out of the ashes of their pasts. It is a voyage of self discovery that takes three hundred years and along the way they find that their lives may not have been by chance. There is a plan behind their immortality and it may be one of sinister design.

Mathias Sorensen was born in 1776, near Copenhagen, Denmark. The son of a fisherman, he’d always dreamed of being a painter, but that dream was not meant to be. Instead, his life spirals downhill when, at age nineteen, he meets a man named Gunnar Pederson. Gunnar takes him in, but his cruel appetites destroy Mathias’ life. He eventually flees, but a broken shell of the man he was, whose only recourse is to rebuild himself in the image of his tormentor.

Dorian Thorne was born, thirty-six years later, in the East End of London, England. Caught up in the cholera outbreak of 1832, he learns of his immortality early in life, but at an awful price. Cursed to walk the earth for over a century, unable to remember his early years, he eventually learns that he suppressed these memories because they were too painful. Shunned and forced from the only person he cared about, the experience would scar his ability to let anyone get close to him for the rest of his life.

The two men meet, for the first time, in London in 1862, but part three years later after a volatile and unhealthy relationship. It will be over two hundred years before they see each other again, both having found love and loss, been involved in some shady and less than legal situations, witnessed the end of the world, and tried and failed to gain peace and understanding of themselves. In the end, they begin to realize that their lives are somehow, inexplicably, entwined and they find the keys that may just lead to the ultimate explanation of who they are and how they can begin to heal.

Spring Horton is a novelist and script writer who sometimes dabbles in poetry. She has recently finished an MA in theatre directing as well and hopes to branch out in that field. She has published three novels, a play and two books of poetry. Her latest novel is From The Embers, Book One of the Ancient Order. She is currently working on the sequel, After The Dawn and a M/M romance novel, Autumn in the Highlands. When she isn’t writing, Spring enjoys travelling, baking, art, theatre and films and the outdoors.

I’d been writing short, M/M erotica stories for a few years as well as full length novels in other genres. The true inspiration for this book though, was a couple of fellow writers. We wanted to start with no story line; nothing but characters and then write the book by writing as our characters. This is why there are multiple POVs because I was writing as them. In the end, the book was mostly my creation, but there will be multiple authors involved in the sequel, After The Dawn.