You are here: Products From Nathan to Nanako: Changed into a Cheerleader by T.F. Wright 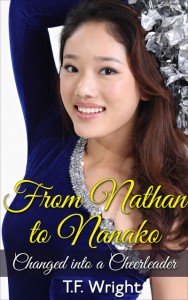 From Nathan to Nanako: Changed into a Cheerleader by T.F. Wright

Nathan’s an awkward, gentle giant: a big, shy, oaf of a man who crushes hard on the head cheerleader at his school, Daniella. Nathan tries out for the football team to impress her, but even though he doesn’t make the cut, he manages to get invited to one of Daniella’s famous parties. Little does he suspect that it’s a party for two, and Daniella is bent on satisfying her gender-bending, exotic tastes…

I first started writing stories online when I was 16 years old. A natural introvert, I felt it was difficult to find people who understood me. When I posted my first story, I suddenly felt like I had a way to connect with people that was punishingly elusive elsewhere. The passion of writing is a force that gives my life meaning, and I’ve never looked back.

I’ve been interested in the genre of gender change themed romance/erotica for some time. It’s a genre that’s all about bucking traditional roles and allowing male characters to explore their feminine longings. This book is for every man who’s fantasized about becoming a woman,is book, as will for every woman who has dreamed of guiding a man through that journey.

“So, now that dinner’s done, would you like to know why I invited you?” Daniella asked.
I swallowed hard, then nodded a little. I wasn’t sure why I was so nervous, but something about her tone of voice made me feel as though this was important.
“Uh…sure, yeah,” I replied.
“I know you’ve been watching me, Nathan,” Daniella began in a low voice.
“Watching you?” I replied, my own voice coming out in a panicked squeak.
“From behind the bleachers,” she said, confirming my worst fears. “From math class, from the school dances, from anywhere you can, really. You’d probably sneak into the air vent in the girl’s locker girl if only you’d fit.”
I felt horrified. Is this the reason she’d invited me over? To humiliate me? To accuse me of being a stalker? A flurry of conflicting emotions coursed through my veins – rage, frustration, betrayal, anxiety…despair. I rose to my feet and prepared to go.
“Hold your horses, Nathan,” she said. “I didn’t say I minded all that attention.”
“You…you don’t mind?” I asked, slinking back into my seat, my shoulders slouched as a wave of relief washed over me.
“Actually…I’m kind of flattered,” she said, as she stood and began slowly walking towards me.
“Really?” I said, gulping a little.
The nerves were back now, full force. What a rollercoaster evening, I thought.
“Yeah, that’s why I invited you. We have a cheerleading state championship coming up, and I want to debut some new routines for the squad to do,” she explained.
“So you want my help…designing cheerleading routines?” I asked, scratching my head.
“You’re so sweet,” she said through a giggle, as she stood on her tiptoes to plant a peck on my cheek.

Be the first to review “From Nathan to Nanako: Changed into a Cheerleader by T.F. Wright” Cancel reply