You are here: Products From Best Friends to Lovers by April Dryad 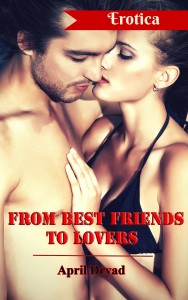 From Best Friends to Lovers by April Dryad

June has never seen Jason. Not face-to-face, at least. They have been chatting online for ten years, and she can easily say he’s her best friend. Now that she has finally put an end to a relationship that wasn’t going anywhere, she decides to pay Jason a visit and see if he really is the guy he appears to be on webcam. She’s not sure the ten days she plans to spend with him will mean anything. After all, she might not like him at all and be back home the next morning. But she has been alone for too long and she’s willing to take her chance.

Jason is waiting for her at the bus station. His kiss, the touch of his hand, the way he smells of cigarettes and cologne… June is confused. He’s not exactly how she pictured him in her mind, but she can’t back down now. She knows him well enough to trust him, and they can still stick to being friends. However, once she finds herself in his bedroom, things take a different turn and June might just find out that he’s way better than she could have ever imagined.

Jason… I have always felt attracted to Jason. I’ve always had a thing for brown-haired men, even though I had been with a blond guy for ten years. Somehow, longish dark hair, a neatly trimmed beard, and the promise of soft chest hair that I could thread my fingers through sounded very masculine to me. In the photos he had sent me and on camera Jason seemed exactly like that. So, is it bad if I feel a bit disappointed when I realize he isn’t as tall as I thought he would be, that he isn’t as well-built, and he is rather thin, too thin for my liking? I love guys with wide shoulders and strong arms who can hug me so tight that a bone or two would crack under the pressure. But Jason’s hand feels too smooth in my own hand. He puts the suitcase down and hugs me, and when I hug him back I feel a bit disappointed that my arms can close around his back with no effort. All this time I knew that he wouldn’t be exactly how I expected him to be, and I prepared myself for this. But now I realize that I was mostly thinking of his personality, not of his looks. I never took into consideration the fact that someone can look so different than in the photos. He’s just told me I am prettier in reality. What am I supposed to answer?
“Uhh… I… I thought you’d be taller.”
“Now, aren’t you a funny one?” he jokes. “Such nice things you say…”
We get on a cab and it takes more than half an hour to reach his place. All the while we talk about how busy the city is, how hungry I am, and how he’s going to cook me something when we get home. Maybe we’ll also watch a movie, or just lie next to each other and talk. There are long minutes when neither of us knows what to say, and then I stare out the window like I have done for the past seven hours, and think about what I’m doing… again. Am I really doing this? Why am I here, on a cab with a stranger, heading to his place? No, of course he is not a stranger. It’s just… I suddenly realize that the fact that we’ve been online friends for so long doesn’t count as knowing him. He seems pleased with me, and he keeps staring at my profile like I’m the eighth wonder of the world. Every so often he raises my hand to his lips and kisses the back of it, then he gently sets it down on his knee. I squeeze his knee in an attempt to assure him that everything is fine, I’m quite happy with the situation too. The car advances slowly and my stomach growls in protest. I lean my head on his shoulder and inhale the scent of cigarette smoke that is stuck to his clothes, hair, and skin. He looks down at me with a bright smile on his face and pure joy in his eyes, and all I can think of is “Come on, June, don’t be a bitch. Give the guy a chance! You know him, he’s worth it. So, he might not be as tall and well-built as you expected, but he’s handsome enough. Ten days. Give him ten days to convince you.”