You are here: Products FRESH SHEETS Dante Jones by KNIGHT 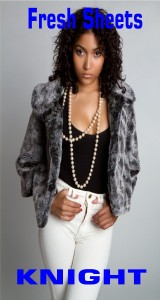 So you’re a highly ranked gangster with more qualification, more responsibility and a higher income than most top company executives. So what do you say when your boss, the drug cartels godfather, asks you to babysitter his 19 year old voluptuous daughter while he goes on a cruise with his latest floozy?

Known on the streets as Black Peter, he doesn’t want to babysit. He wants to make money, make deals and make love to beautiful and talented escorts who do not desire his love or affection. He is proud that he is using his MBA in the real world and enjoys the fruits of labour. A spoilt princess who could get him killed if she throws a tantrum is not part of his plan going forward. So as long as he can keep her out of harms way and happy at the same time everything will be fine.

She’s hot and she knows it, all the guys at university know it, she doesn’t want or need a babysitter. She’s smart, sassy and independent. She will not be kept cooped up in her dad’s assistant’s New York apartment for two weeks while he cruise the Caribbean with the latest woman to turn his head. So her goals is simple: get through the next two weeks with as little supervision as possible, meet who she wants when she wants, and make sure she stays on Dante’s good side, so she doesn’t get her allowance cut.