You are here: Products Freeing Grace by Patricia Rosemoor 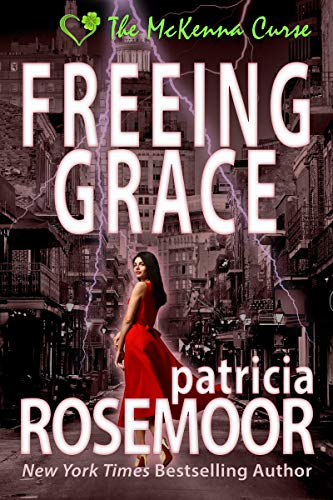 Grace needs protection and is forced to trust P.I. Declan McKenna. Every touch they share ignites passion, but also reminds him of the McKenna curse, making Declan wonder if he can save Grace’s life.

June 22, 1919
Donal McKenna,
Ye might have found happiness with another woman, but yer progeny will pay for this betrayal of me. I call on my faerie blood and my powers as a witch to give yers only sorrow in love, for should they act on their feelings, they will put their loved ones in mortal danger.
So be it,
Sheelin O’Keefe

Excerpt:
The raven-haired woman entered through a door that should have been locked. It was well after ten. Behind her, the street was muted with fog that curled over the pavement and up the streetlights. Declan McKenna stood frozen at the front desk of Vieux Carré Investigations and let the stapler he’d just picked up tumble from his fingers back to the desktop.
“I need you,” she said, her low, throaty voice sizzling down his spine.
“Then have me. I’m yours.”
A perfectly arched brow revealed her annoyance with his attempt at humor. “I need your services,” she amended. “You are a private investigator?”
“Forgive me. You took me by surprise.” He straightened. “Declan McKenna, one of the owners of Vieux Carré Investigations.”
“I’m Grace Broussard.”
Declan moved to his office door and held out an arm to invite her in. “Please.”
What an eyeful she was in a sleek red dress. Her raven hair dusted her shoulders. There was something familiar about her, but he couldn’t quite place where he’d seen her before. Mesmerized by the length of Grace’s spine as she moved into the office before him, Declan removed his jacket.
She was making him sweat.
Grace took a seat, and Declan rounded his desk, one of the many antiques adorning the office. Declan hung his jacket on the back of his chair and sat. “What can I do for you, Ms. Broussard?”
“I need you to find out who’s been following me.”
“What makes you think you’re being followed?” Not that he disbelieved her.
“Let’s say my senses are sharp, in tune with my surroundings. I’ve been aware of someone following me several times in the past two weeks. I thought perhaps it was a fan. But then there are these.” She opened her purse and pulled out several folded sheets of cream-colored paper. “The first came in the mail at work.”
Unfolding one of the missives, she placed it on the desk and slid it toward him.
I’VE BEEN WATCHING YOU
She placed the second sheet on top of the first. “The second message was delivered to me at a social gathering. A charity dinner. I found it under my plate.”
I SEE EVERYTHING YOU DO
“And now there’s this, pushed under my apartment door sometime during the night.” Her hand was shaking as she smoothed out the final note.
I CAN EXPOSE YOU
“Do you know what the threat means?” he asked.
“It must have something to do with my work.”
“Which is?”
“I represent a new line of designer clothing called Voodoo.”
Declan snapped to and felt a flush creep up his neck as he placed her—that ad in the New Orleans Times-Picayune. Her lying across a red satin-covered bed, back arched, arm lazily thrown over her head, the words under the photo: Voodoo… Put A Spell On Him Tonight….
“Bad publicity could be devastating to my mother’s career. She’s an assistant district attorney and slated to fill a judicial vacancy. And then there’s my brother, a city council member up for re-election."
Grace’s emotions were raw, right on the surface. A person didn’t have to be an empath to read her. But as a McKenna, he could do so more quickly and more deeply than the average person. All the members of his family had some native ability—his being able to read anyone’s emotions.