You are here: Products Fox Ridge, The Secret: The Secret, Book 1 by Bonnie Marlewski-Probert 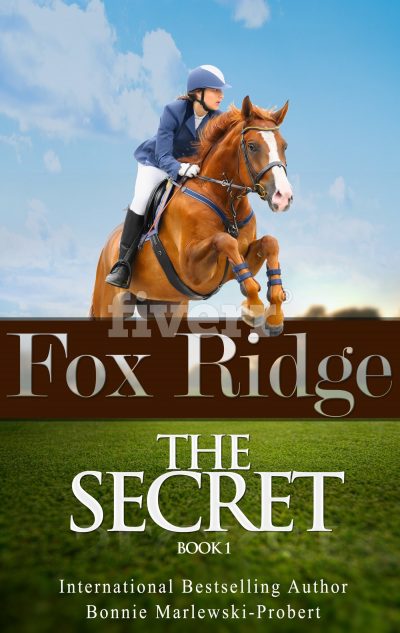 Fox Ridge, The Secret: The Secret, Book 1 by Bonnie Marlewski-Probert

As the saying goes, “We are only as sick as our secrets.” Professional horsewoman Katherine McMahon is running from her secrets and lands in North Carolina where she opens Fox Ridge Equestrian Center, specializing in high end Hunter/Jumpers. She has enjoyed great success in the six years she’s been at Fox Ridge, but things are about to change.

If people only knew who she really was, Katherine believes her world would come crashing down around her ears. A wickedly talented 30 something single woman running a successful horse operation, Katherine is beloved in the local community. Her plan is to keep it that way by taking her secret to the grave UNTIL she meets Dr. Brandon Stafford, the new veterinarian in town. For the first time in six years, she finds herself wanting a man: This very special man. While she is brilliant when it comes to working with horses, she sucks when it comes to personal relationships. In order to have a healthy relationship, she knows there must be honesty and trust but if she shares her secret with this amazing man, it could cost her everything.

When a terrible accident occurs, Katherine has to decide, will she risk everything for love or spend the rest of her life alone?
Find out when you read Fox Ridge, The Secret, book 1 in the series of 5 books. If you love horses, contemporary romance and hot vets, you will love this series that gets hotter with each book!

Bonnie Marlewski-Probert, international bestselling author, has worked in the horse industry as a teacher, trainer, speaker, barn owner, syndicated columnist and author for more than 30 years. She is the founder of Whitehall Publishing which has published award winning, bestselling books for hundreds of authors around the globe in a variety of genres. Bonnie is the creator of the Horse Tales for the Soul book series, sharing the true, heartwarming stories of hundreds of horsemen.

She started her riding career at the age of eight and her goal in every facet of her career has always been inclusion. She believes that the health of the horse industry comes from embracing every style of riding, every breed of horse, every riding demographic, and every training philosophy as long as it is safe for both horse and rider.

While she has made her living writing nonfiction for 20 years, the Fox Ridge series is her first foray into contemporary romance.

Bonnie also works with nonprofit organizations as a consultant through her website, funding101.org with a focus on honing their fundraising and media-relation skills.

This series is based loosely on my own experience running my own barn when I was in my mid-twenties. It was a hard but magical life that I would not have traded for anything. However, I never would have considered pursuing that dream had I been married because it was too risky physically and financially to have considered taking anyone else with me.
All of that changed when I met a man from England who pulled in my driveway one day looking to ride. He had worked horses on the tracks in England and for the first time, I considered bringing someone else into my world. Through a series of terrible turns of events, that was not to be. The Fox Ridge series has its happy ending because I wanted to make certain that my readers would always have a happy ending, even if that couldn't always be the same in real life. In my books, it is always the case!

CHAPTER 1: MORNING TRAINING
Wickedly talented on horseback, Katherine McMahon, the
petite, red-headed owner of Fox Ridge Equestrian
Center, was a study in contrast. On the one hand, she’d
worked hard to make sure her customers felt like they were part of a
family, but Katherine had no family of her own. Warm, outgoing and
cheerful on the outside, while at the same time riddled with shame, fear
and guilt on the inside, she demonstrated a keen, focused interest in the
lives of her clients which allowed her to hide her own sordid past in
plain sight. All of the things Katherine created for her customers were
precisely the things she desperately longed for in her own life, but
knew she could never have as long as she remained haunted by her
past. Yes, Katherine McMahon was a contradiction.

Mercedes Benzz, the large chestnut gelding, exploded over the five-
foot oxer, his hooves pounding the ground in harmony to the driving
beat of the Clapton/Santana guitar riffs blaring throughout the expan‐
sive indoor riding arena early that Monday morning. The fall air was
crisp as Katherine powered her mount over the course of six fences,
making it look easy. At 16.3hh, the gelding made Katherine look like a
child on his back. Notwithstanding, she was a grown woman of 30
years, but her petite 5'4” frame often led people to initially doubt her
ability to handle the massive equines in her charge – that is, until they
saw her ride.

Benzz, as Katherine called him lovingly, was her personal show
horse and the only tie to her old life in New York. It was their success
in the show ring in North Carolina that put her on the map, six years
ago to the day, when she opened Fox Ridge Equestrian Center.

After schooling the gelding over the course, Katherine pulled the
small fob out of the pocket of her fitted black breeches and clicked it to
turn off the stereo that sat secured to the rail against the wall.

“Jimmy, I’m going to finish up with some flat work. I'll ride Jackson
next. Go ahead and tack him up now, I'll work him over the same
course but let’s drop the height down to three feet for him and then
let’s work the bay. We’ll finish the morning on low fences with the
green mare,” she called out from the opposite end of the large arena.

“Okay Katherine, I’ll have them ready for you.” Jimmy Weston, her
cheerful 25-year-old barn manager, headed for the stall at the end of
the aisle where Jackson, the large grey gelding, was stabled. Jackson’s
owners named their horse after General “Stonewall” Jackson of the
Confederate Army. His gray color reminded them of the uniforms
worn by the Confederates during the civil war. In the South, Katherine
learned quickly, history still mattered.

The pair trained horses early each morning, long before the barn
officially opened at nine a.m. so Katherine could indulge in her two
favorite vices; training jumpers and loud music, both of which put her
in a Zen-like state of mind. The duo worked together effortlessly,
Jimmy handling things on the ground and Katherine handling business
in the saddle.

The barn was a magical place early in the morning, especially in the
fall when the trees were ablaze with color and the air was crisp. The
sunlight glinting off the rafters, the sounds of birds fluttering through
the expansive covered arena looking for pieces of grain left behind
after the morning feed, and the smell of sweet feed and alfalfa hay
mixed with the smell of horse were all intoxicating to Katherine
McMahon. Recognized as a master when it came to training horses and
riders, she only wished she was half as gifted when it came to her
personal life. It wasn’t that men weren’t interested in her; it was her
fear that they would get too close that kept her isolated and admittedly
more and more often, lonely.

She hit the fob one more time to turn on the stereo, gathered up her
reins before pressing Benzz into a soft posting trot on the left-hand
track. She cut a smart figure in her black breeches, knee-high hunt
boots and today, a pink polo shirt. The duo would spend the next 10
minutes working on extensions in both directions before swapping
mounts.

Even though Katherine’s focus was on turning out great jumping
horses, Fox Ridge boasted both Western and dressage instructors too.
Her goal was to create a facility that focused on embracing all styles of
riding and all breeds of horse while providing enough income streams
to keep her staff employed in what could sometimes be a tough indus‐
try. One of Katherine’s greatest strengths was making sure she always
had plenty of options. That skill was honed out of necessity.

While she and Jimmy went from horse to horse as they did each morn‐
ing, today was different for Katherine. Her mind was clouded with
concerns that she couldn’t ignore. The hunter/jumper facility in
Canada wanted her decision on their job offer and she had no idea
what to do. I don't know if I can leave Fox Ridge, she thought. Alberta,
Canada is far enough away that there would be almost no chance anyone
could find out about my past. Being head trainer would allow me to ride all
day and not have the responsibilities or the headaches of owning and
managing a facility and I would get a steady paycheck. She learned the hard
way that only her staff received steady paychecks, while the barn
owner got paid after everyone else got theirs and then, only if there
was anything left after all the surprise bills were paid, like roof repairs
or broken water lines. It could be a fresh start and maybe then I could
finally risk having a personal life, she pondered as she rode her final
horse for the morning.

Since that horrible night six years ago when she lost her husband,
Katherine moved to North Carolina and away from everything she
knew and loved in New York. The only human tie to her past was her
best friend Sharon McMaster (now Pinter) whom she’d known since
they were both kids riding ponies in upstate New York. Sharon still
lived there and was happily married to Roger Pinter, a successful busi‐
nessman climbing the proverbial corporate ladder. The couple cele‐
brated their first baby girl, Pamela, the year before. In six years,
however, Sharon had never visited Fox Ridge and Katherine had yet to
meet Sharon’s daughter in person, although they had met during
Skyping and FaceTime. It was all at Katherine’s insistence because she
couldn’t risk her past life meeting her present life and while Sharon
didn’t like it, she of all people respected the need to keep Katherine’s
secret. After all, she was there that night.

Be the first to review “Fox Ridge, The Secret: The Secret, Book 1 by Bonnie Marlewski-Probert” Cancel reply