You are here: Products Forgetting My Way Back to You by Karina Bartow 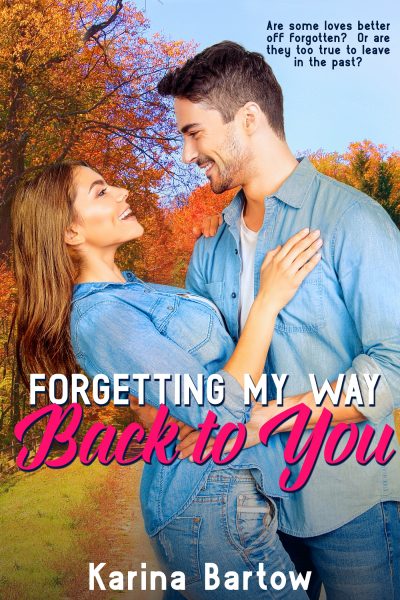 Forgetting My Way Back to You by Karina Bartow

After a decade-long estrangement, high school sweethearts, Charlee Stoll and Hunter Jett, reconnect and enjoy the reunion neither of them expected. As their past struggles begin to mar their present happiness, tragedy strikes. Charlee’s thrown off a horse and sent into a week-long coma.
When she awakens with no clue who Hunter is, he seizes the chance to right his wrongs. To do so, though he has to overcome her father’s displeasure, another ex-boyfriend vying for Charlee’s love, and her mission to regain her memory. Through charm and deception, can he win back her love…before she discovers the truth?

Karina Bartow grew up and still lives in Northern Ohio. Though born with Cerebral Palsy, she’s never allowed her disability to define her. Rather, she’s used her experiences to breathe life into characters who have physical limitations, but like her, are determined not to let them stand in the way of the life they want. Her debut novel, "Husband in Hiding", was released in 2015 and was well-received by readers. She’s excited about her upcoming love story, "Forgetting My Way Back to You", to be released by Vinspire Publishing October 15, 2018. She may only be able to type with one hand, but she writes with her whole heart!

"Forgetting My Way Back to You" is comprised of parts of my first book, which was about a woman who developed selective amnesia after a head trauma. As young as I was—eighteen—when I started, I’d already experienced some events I wouldn’t have minded forgetting, just to be free of that baggage. Thus, like many stories, it began with the illusive 'What if?'

“I wouldn’t leave without you,” Hunter cried. “Not again. If you didn’t want me to go, I planned to tear up that contract and never call them back.”
His words should’ve touched her, but her anger blocked them from reaching her heart. She turned and climbed back onto the horse. “I guess I’m the one leaving this time.”
Kicking the horse into motion, she could hear Hunter mounting his in an attempt to follow her. Desperate to get away, Charlee urged the horse pick up his pace. At full speed, she suddenly felt his left front leg go limp, making him lose his footing and tumble to the ground. Jolted from the saddle, she found herself flailing in the air. She didn’t even realize how close to the cliff she’d ridden until she saw Hunter ten feet above her.
Then, everything went dark.