You are here: Products Forever Together by Jade Whitfield 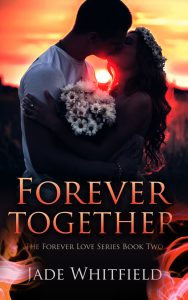 Forever Together by Jade Whitfield

Dark haired beauty, Cindy Martin was once lucky in love, until her boyfriend broke her heart and sent her running. Attending college in faraway Los Angeles was the perfect excuse to get away, settle her heart and drown herself in wine and tears – except now she is back for the summer, and her ex hasn’t gone anywhere.

Brady Cooper is handsome, arrogant and still head over heels in love with Cindy. Six months ago, he let fear rule him and he made a mistake that cost him everything – now he just has to get her to believe him.

Surrounded by friends and family that know too much and meddle a little too closely, can this once perfect pair overcome the obstacles in front of them, mend their hearts and finally be Forever Together?

As a passionate reader and writer, Jade Whitfield loves nothing more than a good cup of coffee and a sweet romance. A fan of ‘Happily Ever After’, she believes that everyone should find their own forever love and is committed to telling stories to inspire that.

I’m a fan of comedy and a fan of romance and this is the perfect mix. As much as I enjoyed writing my first book, some of the angst was very heavy. This was the perfect way to decompress.