You are here: Products Forever My Always by WS Carmichael 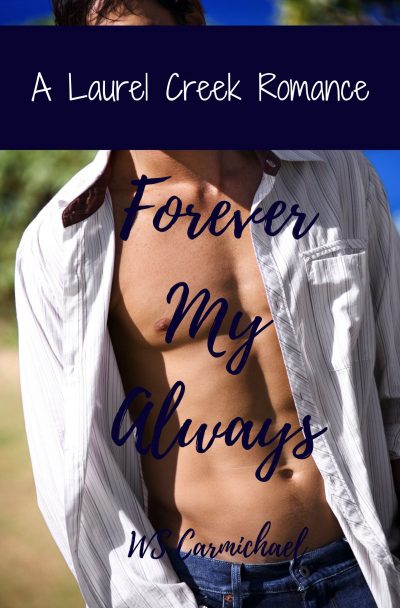 Forever My Always by WS Carmichael

Kevin Montgomery loves his life. He has the best of both worlds – playing the fun, crazy uncle every couple of months and then escaping back to his carefree bachelor life when he’s had enough of crying kids and sticky fingerprints. Throw in hanging out with his best friend, Amy Harrison, and you could say his life is just about perfect.
Amy Harrison is a smart, successful attorney with one of Manhattan’s most prestigious firms. Too busy with her career to entertain a serious relationship, she’s content to spend her time with her best friend, Kevin, traveling often to his hometown of Laurel Creek. However, the more time she spends with Kev’s nieces and nephews, the more she yearns for a family of her own.
Everything changes when an embezzlement scandal of epic proportions rocks their world. Facing federal charges and his changing relationship with Amy, Kevin is at risk of losing everything. He must prove his innocence and face his growing feelings for Amy. Fearing he may not have a future to offer her, he’s forced to watch as another man moves in on Amy’s heart.
Will the magic of Laurel Creek be enough to align two hearts destined for each other or will they miss their one chance at true happiness?

WS Carmichael is the author of the Laurel Creek series, attempting to write the world into romantic bliss one novel at a time. Based in upstate NY, she travels as often as her hectic schedule will allow. When she isn’t busy writing, she’s a mother, nurse and avid sportswoman.
WS Carmichael fell in love with romance at an early age when she would sneak Harlequins from her mother. A voracious reader, she eventually made the jump to writing.
Writing is her passion and she’s always jotting down new storyline and character ideas. Often, her characters take on a life of their own and don’t always cooperate with her plan for them. She loves to create well developed, strong alpha male characters that don’t fit into the typical romance hero mold. Believing whole heartedly in happily ever after, she gives her heroes the heroine they deserve.

I've always loved reading, especially romance – all sorts of romance. I would often find myself thinking about characters and storylines, thinking "If I were to write a book, it would be about…" Finally, I decided to stop dreaming about writing and actually write something.
This book is my third and the third in my Laurel Creek Series. I guess you could say it was inspired by the first book because before I wrote At Long Last, I had a picture in my head of what the other books in the series would be.